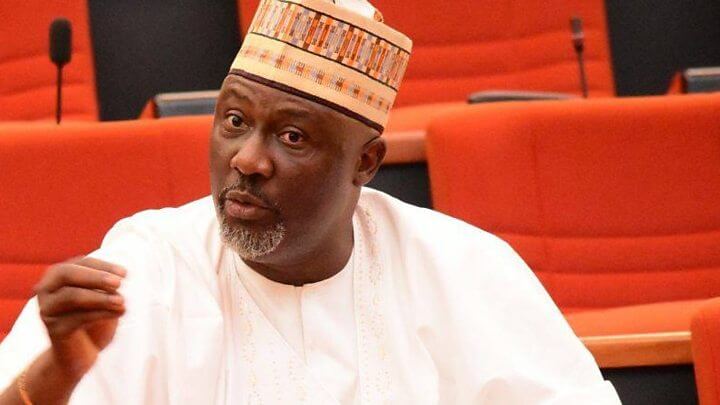 SENATOR Dino Melaye, representing Kogi West at the upper legislative chamber has hit back at President Muhammadu Buhari over his claims that politicians were responsible for ongoing nationwide killings.

Mr Buhari has on several occasions shifted blames to politicians as motivating the killings for their personal gains.
The president first launched his attacks on politicians when he visited Jos, the Plateau state capital, last week.
His media aide, Garba Shehu had quoted the president in a statement as saying that: “desperate people had pursued their quest for instability and chaos which they hoped would give them an advantage in the coming elections”.
Mr Shehu went on to add that: “We know that a number of geographical and economic factors are contributing to the longstanding herdsmen/farmers clashes. But we also know that politicians are taking advantage of the situation. This is incredibly .”

On Thursday, Mr Buhari launched his second attack when he played host to a delegation of Christian Association of Nigeria (CAN) from the 19 northern states at the presidential villa, Abuja.
While describing those accusing him of incompetence the Nigerian leader said his accusers were evil-minded people.
“When some (people), for clearly political purposes, attempt to suggest that this government is doing nothing about the killings, and that I, being Fulani, must be encouraging these satanic acts, it seems to me that there is no limit to the evil in the minds of these men,” he said.
Besides shifting blames when confronted on his failures on national issues, the Buhari administration has on several occasions suggested that cattle ranching was the solution to farmers and herders clashes across the country.
The suggestion has widely been rejected by various states who insisted that they have no land for cattle ranching.
Earlier in the week, the Presidency had told those against providing land for the proposed ranching that submitting their lands for ranching was better than being killed by killer herdsmen.
“Ancestral attachment? You can only have ancestral attachment when you are alive. If you are talking about ancestral attachment, if you are dead, how does the attachment matter?” Special Adviser to the President on Media and Publicity, Femi Adesina, queried while speaking on an AIT morning programme in response to a question on people giving out their ancestral attachments.
But reacting, Mr Melaye on Friday threw a question to the president on his claims.
“If PMB said politicians are the cause of the killings. So why is ranching the solution?” he tweeted via his twitter handle.

We Can't Continue This Way, Buhari And His Government is a Total Failure to Nigerians – Gumi Speaks