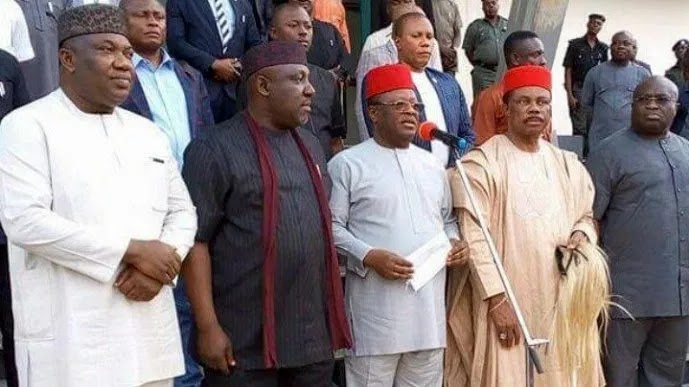 South East governors and other Igbo leaders yesterday said no to the establishment of cattle ranch in Ebonyi State or any state in the zone as proposed by the Federal Government.
The governors also declared support for the ongoing call for restructuring of Nigeria by the apex Igbo organisation, Ohanaeze Ndigbo and three other geopolitical zones of the country.
These formed part of the highlights of a nine-point communiqué issued by the forum, after its meeting at the Lion Building, Government House, Enugu, yesterday.
Chairman of the forum, David Umahi, who read the communiqué, said: “Ndigbo’s stand on restructuring of Nigeria was presented to the forum by the Ohanaeze president, based on the resolutions arising from the Awka enlarged Igbo meeting.
“He also laid down the template to the governors. The forum thanked Ohanaeze for a job well done and reiterated its earlier stand that restructuring is the only way forward for Nigeria.
“The forum also decided that the governors would take a look at the template of restructuring and make its final stand clear by the next meeting of the forum.”
The governors decried the increasing challenges posed by the movement of herdsmen from one state and region to another with
the resultant effect of massive destruction of farmland; and the attendant clashes with farmers in the zone.
He said governors have been spending huge funds in settling farmers; whose farms and crops were destroyed. He requested for an emergency meeting in South East, with federal security chiefs, farmers and herdsmen to stop the movements and prevent the clashes.

“The forum approved to support the setting up of an industrial and infrastructure development bank to fast track capital flow for rapid development of the region, as a private initiative.”
On the Nigerian National Petroleum Corporation (NNPC) pipeline in the area, the forum said NNPC
Manager on Security, Dr. Sam Otobeze, briefed them on the repairs going on at Emene depot and assured that the pipeline will soon be fully repaired and NNPC may start pumping to the depot very soon.
The governors, however, commiserated with the governor of Plateau State and his people on the recent killings, while demanding justice for the Plateau people.
“We condemn the killings and join other regions to demand justice for Plateau people,” the governors said.
Others at the meeting include, Ifeanyi Ugwuanyi of Enugu State; Willie Obiano of Anambra State, represented by his deputy, Dr. Ikem Okeke and Okezie Ikpeazu of Abia State, who was also represented by his deputy, Ude Oko Chukwu.
Facebook Comments
Loading...
Related Topics:NewsNigeria
Up Next