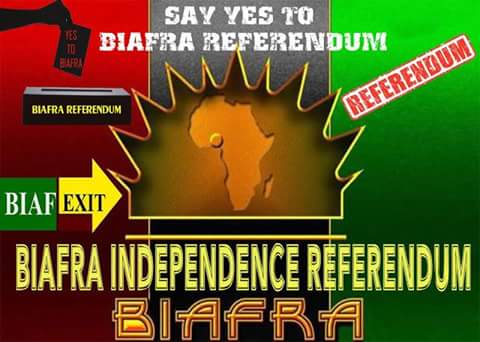 Biafra: The Proposed Biafra Independence Referendum, A Universal Right A Sacrosanctity
Firstly, it is important that we elucidate briefly on what referendum is all about and the need for referendum. The word ‘Referendum’ simply means a process by which an entire electorate or the people of a particular nation are being called up to the polls, to cast a vote on a particular raging political proposal. It often requires an affirmative i.e. a YES or a NO over the ballot paper, to indicate validity. It maybe, on a need for the adoption of a new law within a political administration or a process of determining the willingness of a people of particular region of same country, to exist as a separate and sovereign nation. The urgency for the later often springs from series of nationalist campaigns for a sovereign territory, often propelled by obvious injustices against the agitating territory or consequent from neglect of organic boundaries and observed breaches of bilateral agreements. A sustained indictment on the existing nation of neglect abuses and marginalization often results to the clamour for political sovereignty through referendum at the polls.

Instances of referenda as legitimate international alternative for determining the decisions of the people are visible across the World. It is a trending alternative across continents of the political cosmos. The Scottish people, in 2014, took to the polls and tested for the first time, the veracity of their nationalist campaigns. The day was fixed and the affirmative polls held. The outcome of the polls did not favour the nationalist campaigners, but that did not however stop the resoluteness of the nationalists to keep calling for another shot at the polls for a politically sovereign state of Scotland. In 2011, the people of southern Sudan went to the polls to test the strength of their argument, to have a separate sovereign state, from the mother Sudan. The day of the polls till date remains a success story for the nationalists in that part of the World, as the outcome of the referendum polls registered an irrefutable affirmative in favour of the nationalists from southern Sudan. The British government are also here as nation state, that have gone through same process of referendum, to withdraw their membership of the European Union, an economic Union of formally twenty-eight-member States across Europe.
Several international charter, standards and laws have also duly served ‘ referendum’, the needed legitimacy, to exist as a civilizational global dictum, away from the primitive standard of firstly resorting to chaos. Biafrans are sure not the first set of people to adopt this all-winning and growing global tradition for separatism via referendum. As long as humans walk the cosmos Earth, change and evolution must continue to affect our every stratum of existence. Political evolution, economic evolution and overall social reordering must continue. The phenomenon of change must continue to transverse all aspects of humanity; both biological, and otherwise. As nations adjust their various laws and traditions, in other to move on with the growing World, Africa and Nigeria in particular must join the pace and set the standard growing. No laws nor vested individual interests can be better priorities to human lives. Whatever is achievable, to ensure maximum security of lives, must form the basis for any government policies and actions. The yearnings of the people remain the desire of their God.

A country where certain of her populace are regarded as minorities is not one viable enough for Biafrans to desire to exist in. No one can accept being referred to as a foreigner in his father’s house. The treatment of a segment of supposed compatriots as a conquered people cannot spur any vestige of real exhibition of allegiance and commitment to nations. A situation in a country where all the people holding all the political and security offices are appointed from one tribe (Fulani) is a call for deep worry. For instance the minister for interior (Ibrahim Dambazau), chief of army staff (Gen.Turku Buratai), National Security Adviser, (Major Gen.Babagana Monguno), Minister of defence (Brig. Gen. Sudan Ali), Chief of air staff (Sadic Abubarka),  I.G.P(Ibrahim idris ), Commandant General of the Nigerian security and civil defence corps (N.S.C.D.C, Abdulahi Muahammadu), D.S.S director general (Lawal Musa), N.I.A director general (Rufai Abubarka), chairman E.F.C.C (Ibrahim Magu), comptroller general of  Immigration service (Muhammed Babagedi), comptroller general, Nigeria custom service (Hamedi Ibrahim), controller gen. Nigeria prison service(Jafaru Ahmed), to mention but afew are all from one tribe (Fulani)!
These are some of the highest political and security offices in a supposed multi-ethnic country, that are unfortunately being occupied by certain tribe (Fulani), in so-called one Nigeria. It is only fair for Biafrans to exit this murderous and criminal entity called Nigeria in lieu of some of these underlying facts and very conspicuous evidences that abound. The exit of Biafrans through the instrumentality of a referendum is the height of poetic justice, considering the amount of injustices and marginalization that have been visited upon peace loving Biafrans over many decades and still counting. The spree of supervised killings and carnages committed against Biafrans is enough for consolation in Biafra referendum. Biafrans as humans bleed blood and therefore deserve every right to exist as such.

It is the right of Biafrans to have a referendum, considering all the international charter that have laid credibility to same. The African charter on the rights of humans, and the UN declaration on the rights of all Worlds indigenous people, also serves as a suitable universal guarantee on such right. Referendum for Biafra exists as a universal sacrosanctity and therefore calls on the civilized World to rise up and live up to their expectations, in advancing the cause of justice globally. The United Nations, The African Union, The European Union, the United States, Russia, China, France and other members of the global ruling elites must seize this opportunity of peace to state by actions that peaceful process of secession is possible via ‘Referendum’. Ignoring Biafrans at this stage of our campaign for peaceful exit can only be understood to mean that peaceful process of self-determination is a waste of time and globally unacceptable.
#MAKE-HASTE TO SAVE BIAFRANS-#Support-Biafra-ReferendumNow!
Written by:
Ani Chris
Editor: Alex C. Okeke
For: Enugu Media Team
Facebook Comments
Loading...
Related ItemsBiafra
← Previous Story Herdsmen Killings: Cows, More Valuable Than Humans In Nigeria
Next Story → Meeting With Ohaneze Ndigbo Others  A Strategic  Approach  – IPOB