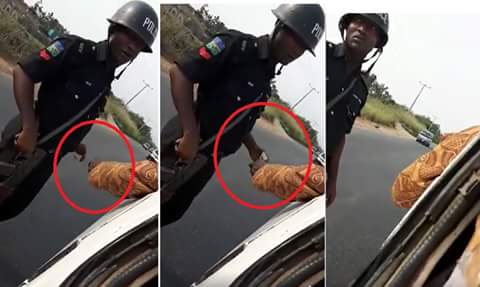 ENUGU— Angered by the recent surge in illegal extortion of citizens by some policemen in the Southeast, a civil rights pressure group, Concerned Enugu Citizens, CEC, has called on the President Muhammadu Buhari-led administration to order for an abrupt end in the nefarious activities of the Force men.
Speaking on Monday at the NUJ Press Centre in Enugu, the group said it has become worrisome and regrettable that some police officers charged with the responsibility of protecting lives and properties of citizens, has turned the Southeast geopolitical zone to an “extortion ground.”
The group who called on the president to prevail on the Inspector General of Police, Ibrahim Idris, to caution and checkmate the activities of the security operatives, lamented that the number of checkpoints created in the zone surpassed that of other regions in the country which has caused a lot of bottlenecks against business activities in the zone.
“It is important to have security patrols and control points in the Southeast but to turn the zone to an Extortion ground is unacceptable.
“A lot of military and police checkpoints in the south east are purely mounted to extort poor Southeasterners. We see these officers harass and abuse Igbo people simply for money; a thing they cannot try in many other places in the country. That is dehumanizing and it gives bad impression to people of the Southeast.

“As Senator Mao Ohuabunwa said on the floor of the Senate, every 300 metre you drive, you will see these guys(policemen) only busy collecting money and abusing people who refuses to give them money. This is not hearsay, we have witnessed it on several occasions and the tempo is increasing and that is not good.
“To make matters worse, these guy comes out in the morning and towards late evenings to do their business and then return back to their bases. It is simply about the money. When you drive through these checkpoints at midnight, when their presence will be much needed you don’t get to see them. Kidnappers and all manner of  criminals use the night to conduct their activities and these officers come in the day to extort people and create bottlenecks for businesses. That is unacceptable.
“As much as their presence is needed in the Southeast, they should be told clearly what they are sent there to do. They need to improve their intelligence gathering and stop the ongoing embarrassment on south eastern roads.
“Our people are beginning to think that this is part of federal government agenda to intimidate Ndigbo. Please Mr President mandate Inspector General of Nigerian Police to remedy this situation immediately,” CEC stated.
Also speaking, John Chukwunyere, a constant road user/traveler in his calculations, said the number of security checkpoints in the Southeast region surpassed those obtainable in the North.

“I often drive from Umuahia to Abuja and back. I have counted the number of road blocks and all manner of security checks  between Abuja and Enugu and then between Enugu and Umuahia.
“Here is the result on two occasions: Abuja to Enugu: 7 and 7, Enugu to Umuahia 33 and 43.
“You will not even find such controls in volatile areas like Benue. Use your tongue to count your teeth.”
By Chukwuemeka Chimerue, Chief Editor, |The Biafra Times
July 9, 2018
The Biafra Times
Publisher: Chijindu Benjamin Ukah