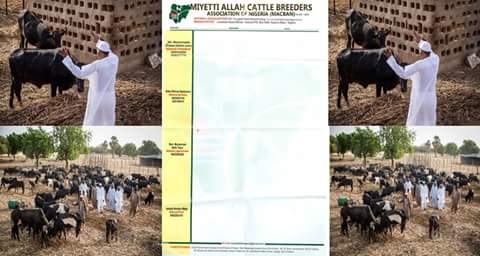 In what clearly appears like a well-spelt out threat and/or dilemma to the Nigerian citizens saying: “Your Land or your Blood,” the office of the number one citizen of Nigeria, President Muhammadu Buhari last Wednesday, urged the Christian-majority indigenous farmers to surrender their ancestral lands lest they die at the hands of the nomadic Muslim-Fulani terrorists accused of genocide over cattle grazing territory and resources. Unfortunately, this was shamelessly stated in bold yet decadent mannerisms which entails that, “We (the government) can’t save you till you surrender your lands to killer herdsmen.”
“There is no doubt that the sole purpose of these attacks is aimed at ethnic cleansing, land grabbing and forceful ejection of the Christian natives from their ancestral lands and heritage,” Nigerian church denominational heads and the prominent Christian Association of Nigeria (CAN) declared at the end of last month, referring to the Fulani assaults that have killed thousands so far this year.

While some human rights and analysts have denounced the killing of farmers by the Fulani as “genocide,” Femi Adesina, a special adviser and senior assistant on media to Nigerian President Muhammadu Buhari, argued that relinquishing lands to the Fulani killers for ranching is better than dying.
Adesina urged the farmers to allow the government of President Buhari, who is ethnically Fulani, to build ranches for the so-called herdsmen who analysts like Faith McDonnell from the Institute on Religion and Democracy (IRD) have deemed to be jihadists or at very least, just terrorists.
READ ALSO: Herdsmen Killings: Ohanaeze blows alarm over impending attacks on Enugu communities
Asked about the indigenous farmers’ attachment to their ancestral land, Adesina reportedly responded thus:
“In Plateau state, where we had the recent orgy of killings [by the Fulani], the government has offered land for ranches and I tell you that some people are interested in this thing not being resolved. You can only have ancestral attachment when you are alive. If you are talking about ancestral attachment when you are dead, how does the attachment matter?
“Where you have land, and you can do something, please do for peace, what will the land be used for if those who own it are dead at the end of the day?”
Also lending its voice to the nationwide condemnation of the recent spate of killings by herdsmen in Nigeria, the Pentecostal Fellowship of Nigeria, PFN, has in strong terms, condemned the incessant killings of farmers and citizens of the country.

PFN which berated the insensitivity of the government to the killings and its failure and/or deliberate delay in bringing the perpetrators to justice, called on President Buhari to be more committed to the safety of lives and property of Nigerians, adding that any government that cannot protect its people does not deserve to remain in office.
PFN said, “President Muhammadu Buhari should immediately bring the mindless killings going on in the country to a halt because Nigerians’ lives, whether Christians or Moslems are very important. The perpetrators of these dastardly acts must be fished out and punished.
“Never in the history of Nigeria have the lives of Nigerians been so cheap. Today, people in any guise can kill with impunity and get away with it. Hundreds of people are being slaughtered at a regular interval and the criminal elements seem not to be brought to justice.
“There is need for our government and security forces to be proactive instead of reactionary. They should learn to be on top of the situation by acting before the criminals’ strike. Besides, there is need for an urgent review of the nation’s security apparatus so as to make it more effective.
“How can we be campaigning and singing about 2019 general election in the country when the nation is on fire with several innocent Nigerians being killed on a daily basis?”
In Plateau, Fulani terrorists armed with machetes and guns massacred up to 300 people across nearly a dozen predominantly Christian villages on June 23 and 24.

Critics of Fulani President Buhari, like the CAN group, have accused the leader of downplaying and even condoning the attacks by the Muslim group.
CAN reports that no one has yet been arrested for the carnage in Plateau, noting: “Unfortunately, no armed herdsmen has ever been arrested for prosecution even when they are caught in the act.”
Referring to the proposal from the president’s office for farmers to accommodate the Fulani on their land, prominent Nigerian Christians said in a statement on June 29:
READ ALSO: Biafra: Restructuring Or Referendum? A Critical Look Towards Solving The Issue Of Agitations In Nigeria
“The attempt by the federal government to create cattle ranches across the country for the murderous herdsmen against the people’s resistance is an open call to anarchy by the government, indicating that there might be other ulterior motives (like taking over the inhabitants’ ancestral farming land) for the call to establish these ranches with public funds which ordinarily should have been private businesses by the cattle owners.”
Southern Nigeria is home to a Christian-majority population while the northern part is predominantly Muslims. Christian leaders have urged followers of Christ to defend themselves rather than relying on the government for protection.
For years now, herdsmen from the nomadic Fulani group have attacked settled farmers who are mostly Christians as they move south in search of grazing for their cattle.
Although disputes between the Fulani and settled farming communities are largely rooted in arguments over territory, some of the attacks also carry religious overtones.
The dispute over land and other natural resources have pitted Muslim herders against Christian farming communities accused of instigating the deadly tensions by stealing cattle and sometimes, alleged herdsmen killings.
READ ALSO: Nigeria’s Innumerable Diseases, Curable Only Through Referendum
Pro-Christian organizations reject the “farmers/herdsmen clash” narrative pushed by Fulani-linked groups and some media outlets, arguing that the so-called “herdsmen” are murderous terrorists seeking to push the settled farmers out of their homeland. They have also clarified that there was no form of ‘clash’ between the farmers and herders as the latter invades the host communities of the former with lethal and sophisticated weapons to drive away unarmed and defenseless Christian farmers and families from their ancestral homelands.
Estimates of the number of farmers who have been killed by Fulani terrorists so far this year vary between 1,750 and 6,000, including women and children.

Currently, the Fulani “jihadists” are deadlier than the U.S-designated terrorist group, Boko Haram while the former was earlier ranked the fourth deadliest terrorist group in the world.
However, ironically, in spite of the numerous killings orchestrated by these herdsmen, the Nigerian government which has done little or nothing to halt the attacks, appears to be encouraging them the more by seeking out means to empower them through loans and allocation of inherited lands of indigenous peoples in the country.
It is pertinent to note that while seeking to grab lands from their owners, the government appears to have forgotten or is deliberately ignoring the fact that cattle rearing and nomadism is a private business venture and not government liability.
READ ALSO: Biafra And Its Rich Agricultural Potentials, Why We Need To Vote For Referendum
Despite numerous calls by well-meaning Nigerian citizens to the government to proscribe and designate as terrorists, these killer herdsmen, it is disheartening and shocking that the government rather than curbing their excesses, is seen going extra miles to pamper these nomadic killers. No wonder the senseless killings has persisted so far and this has become a source of worry to many inhabitants of this country.
We are, therefore, left with no other alternative but to conclude that there is definitely something in the offing not clear to many Nigerians. Pray! What is that thing that is more important than human lives?

Who has been prosecuted for the mindless killings of innocent lives in Benue, Kaduna, Plateau and some other parts of the country? If I may ask; who has been sent to jail? As a matter of fact, which of the Boko Haram insurgents has been prosecuted? Is this government saying it does not know the masterminds of the dastardly acts?
Nigerian Christians have suffered too much. They have been killed; they have been brutalised; they have been denied their basic rights.
In recent times, many notable Nigerians have asked for the restructuring of this nation. Many are agitating for the re-negotiation of the entity called Nigeria, some have clamoured for a referendum. Yet, the government have vehemently refused to listen and engage constructively with the agitators and look at ways of allaying their fears and ending this scourge that has bedevilled the Nigerian state once and for all.
By Chukwuemeka Chimerue, Editor-in-Chief, The Biafra Times
July 8, 2018
THE BIAFRA TIMES 2018
Contact us: biafrawriters@ipob.org
Follow us onTwitter: @thebiafratimes
Facebook Comments
Loading...
Related ItemsGossipNews
← Previous Story No land for ranching in South East, says Governors
Next Story → Biafra: The Proposed Biafra Independence Referendum is An Universal Right and Remains unstoppable – IPOB