No land for ranching in South East, says Governors 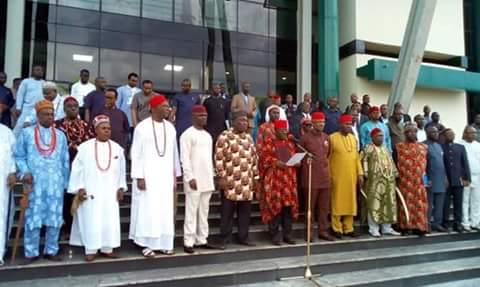 Rising from a meeting yesterday at the Government House, Enugu, governors of the five South East states resolved not to donate any part of the zone for ranching of cows, stressing that they had no land for the project.
During the parley that was also attended by the leadership of Ohanaeze Ndigbo, traditional rulers, captains of industry and other stakeholders, the participants condemned the recent killings on the Plateau.
They therefore commiserated with the state government and the people over the unfortunate incident, demanding that the perpetrators of the dastardly acts should be arrested and prosecuted.
Reading the communiqué at the end of the gathering, the Chairman of South East Governors Forum and Ebonyi State’s chief executive, Dave Umahi, stated: “We wish to let our detractors and mischief makers know that no land in the South East has been donated for ranching, as we don’t have any for the project.”

He continued: “The Federal Government has never requested because it is aware that the land mass in the South East is not big enough for ranching.
So, we have not donated, we have not been asked to donate and we have no intention to donate. So ranching is not approved by South East governors.”
Umahi noted that the governors in the region had observed the increasing challenges that come with the movement of herdsmen from one state and region to another with the resultant destruction of farmlands and clashes with farmers.
The forum’s chairman, who expressed worries over the development, hinted that the zone could not afford more of these, as governors in the region had been spending huge money to compensate farmers whose farms and crops had been and are still being destroyed by nomads.
He disclosed that they had requested for an emergency meeting with federal security chiefs, farmers and herdsmen in the zone to halt the needless clashes.
On the proposed template for restructuring of the country by Ohanaeze Ndigbo, the governors, who gave tacit backing, however added that they would “take a studied look at the template” before coming up with their final stand on the issue during their next meeting.

The governors encouraged the body to continue with its efforts on restructuring as well as sell the template to other zones.
Umahi also broke to the people of the region what looks like a cheery news when he announced that the Nigerian National Petroleum Corporation (NNPC) depot in Emene, Enugu, which had been abandoned for over 20 years, would resume operations in the near future.
He stated that the assurance came following the briefing the governors had with the NNPC Manager on Security, Sam Otobeze, on the repairs of the agency’s vandalised pipelines, adding that they had taken responsibility to safeguard the oil installations.