Home / News / Confusion: Saraki Has Been Bribed By Buhari Not To Defects To PDP 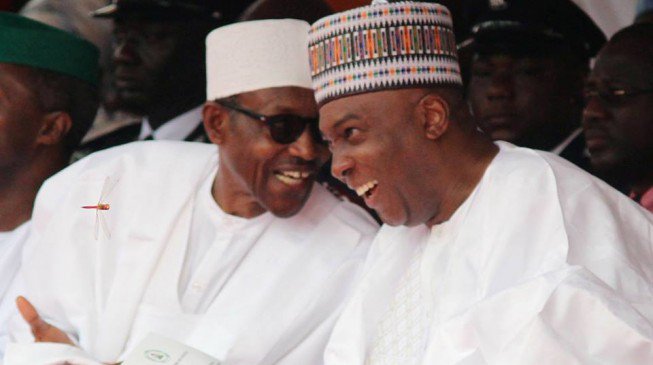 There are strong indications that President Muhammadu has offered Senate President, Bukola Saraki, some juicy offers, to prevent his defection to the Peoples Democratic Party, PDP,ahead of the 2019 general elections.

The National Leader of the Party, Bola Tinubu, was said to have been briefed about the President’s interaction with Saraki and others.
However, Saraki at the recent meeting, in the Presidential Villa, was frank in expressing his mind.
Investigations revealed that the President and some APC Governors met with the Senate President, as a follow-up to the talks with New Peoples Democratic Party, nPDP, Caucus of the APC, being coordinated in the past few months by Vice President, Yemi Osinbajo.
It was gathered that most APC Leaders, Governors, and other members, were unhappy that the party was on the verge of losing Saraki to the PDP.
They believed that the defection of such a “political heavyweight” to the opposition, might greatly affect cohesion in the APC, for the 2019 poll.
The consequences of a depleted APC impelled some Governors and party Leaders, to broker understanding between the President and Saraki.

A source, who spoke in confidence, said: “At least, for the first time, there was a frank session between the President and Saraki.
“He expressed disappointment with his humiliation by the government he fought hard to put in place.
“We were all sober while he relived his travails, because none of us would pray to be in such a situation.
“We understood with him, but we felt it was time to forgive and forget, in order to move forward.
“As part of preventing Saraki’s defection, Buhari has offered him juicy terms including:
.Automatic return as the President of the Senate in 2019,
.More consultation and inclusiveness in key decisions, henceforth,
.Mutual Executive-Legislature relationship,
.Revisiting all issues raised by nPDP Caucus, which formed the basis of talks in the past few months,
.Reconciling with all aggrieved Leaders of nPDP
.Avoiding a repeat of past mistakes which led to his humiliation.
“We also appeal to Saraki to shelve moves to defect to PDP, or any other party. We agreed that he has a better stake in the APC, than any other party.”
Asked if Saraki made any commitment, the source added: “There was none yet, but the atmosphere was cordial and hopeful.
“After the meeting, he even bowed well to the President.
“The session was the climax of talks in the past few months. As one of our Leaders, we leave the final decision to Saraki to take.
“But one thing was clear from Saraki: he will want all commitments put into writing and documented, in case of any breach in the future.
“To some of us who have been wooing him, such a demand is in order. It is a case of once bitten, twice shy.”
Responding to a question, the source said: “The final stage of talks with Saraki will still involve some of our Leaders, like Asiwaju Bola Tinubu, who is coordinating the reconciliation in the party.
“In fact, Tinubu has been briefed on the outcome of the meeting at the Villa, and why he has to play a key role too.”