Home / News / We Have Agreed To Stop Grazing- Miyetti-Allah Speaks

We Have Agreed To Stop Grazing- Miyetti-Allah Speaks 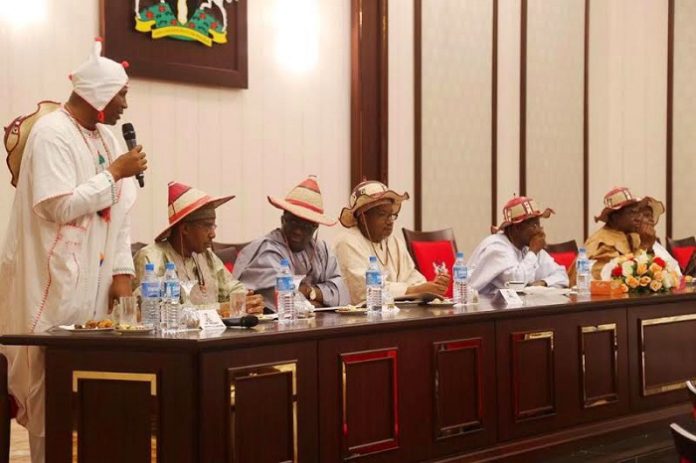 Miyetti Allah Cattle Breeders Association of Nigeria (MACBAN) flanked by the National Secretary, Alhaji Baba Ngelzarma, and other members of the association at a press briefing on the position of the association to stem farmers-herdsmen clashes in Abuja on Sunday.
The association gave the pledge during a meeting it held with Operation Safe Haven, Bokkos Command and the Management of Plateau State University.
Present at the meeting were the MACBAN Vice Chairman, Isa Idris, represented by Sale Yusuf Adam, Operation Safe Haven, Bokkos Command, represented by Lt. Paul Asoh and the Chief Security Officer of PLASU, Mr Istifanus Kurtong, who represented the Vice Chancellor, Prof. Yohanna Izam. The trio agreed on zero tolerance for day and night cattle grazing on the premises of the university.
Idris, the MACBAN representative, pledged his members’ resolve to stick to the agreement reached at the meeting.
He said “we will ensure that our members do not trespass into the premises of PLASU.” The PLASU vice chancellor, who described the agreement as “landmark’’ to the institution, added that “the activities of herdsmen had been disturbing, as they usually break through the university fence to graze their cattle both during the day and night.

“The incessant trespass by the cattle breeders had always resulted to breach of peace in the institution.
“We agreed that henceforth, the herdsmen would stop any form of grazing within the university premises as there was no cattle route running through the university community to warrant such action.
“By this agreement, security agents are now at liberty to take any action they deem fit over any cattle apprehended grazing in the university community during the day or at night.”
The vice chancellor assured parents, guardians and stakeholders that the university authority would not leave anything to chance toward ensuring the safety of students and staff.
He announced that management had approved the location of a security outpost near the university for rapid response. (NAN)