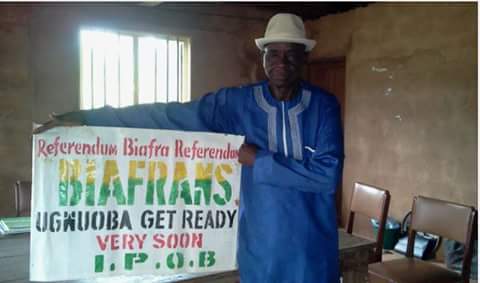 •Villagers elated, welcomes IPOB officials
•Beware of Fulani herders parading in military uniform— Inaugural coordinator warns
ENUGU— The Evangelical Team of the Indigenous People of Biafra, IPOB, in Enugu province yesterday, brought the message for the restoration of the sovereign state of Biafra as they inaugurated another family in Agungwu village, Ugwuoba, in Oji River Local Government Area, Enugu West Senatorial District.
The team led by the State Mobilizer, Mr Chikwe Agwu was warmly welcomed by the villagers who could not hide their excitement over the inauguration of an IPOB family unit in their locality.
Mr Agwu, while addressing the villagers, said the purpose of their visit is to ensure that no clan or community in the state is left behind as the call for referendum is gathering momentum.
He explained that it behooves on the people of the community to spread the message of Biafra to the entire clans in Ugwuoba community, informing them of the need to embrace freedom through the instrument of referendum as the only panacea to realizing Biafra’s independence.

Mrs Ifeanyinwa Udeh, the Evangelical Women leader in her address stressed on the need for active participation of women and youths in the struggle.
According to her, “Biafraland is richly-blessed beyond bounds by God Almighty and there’s no doubt that its citizens will hugely maximise its potentials for the benwfit of all wven in the absence of crude oil and other mineral resources.
“Our human resources and capacity surpassed all that natural resources can even offer to us. That is why it is very important that youths and women in this community have to rise up and take their destinies in their hands by joining IPOB to demand for their freedom and that of their entire generations yet unborn. This cannot be over-emphasized.”
Meanwhile, the inaugural coordinator of the new family, Mr Ezeanyim Shadrack has warned the villagers against possible attack by Fulani herdsmen settling in the area whom he said has been parading on military outfit.
The Biafra war veteran who vowed to ensure that IPOB family unit spreads to the entire 17 clans in Ugwuoba community, expressed fear that if the herders are not being checkmated, they may end up attacking people of the community unexpectedly.
He, however, expressed satisfaction that with the coming of IPOB in the community, the people can easily send message across and unite in one accord to fight the intruders.
“I’ve been a member of IPOB in Ikeabiama zone, Nkpor, Anambra state before I decided to come down to my hometown, Ugwuoba, to ensure that my people receives the message because it pains me that over there in Anambra, the message has spread far and wide while my people down here in Ugwuoba continues to grope in the dark.
“Some cattle rearers on army uniform have surrounded the bushes in our villages. In the next village, they have been camping there in the bushes. There’s also a cattle market in this village where their leader resides. So, I want the villagers to take extreme caution in dealing with the security of these villages.
“They should complain to IPOB on issues like this and not rely on the government who does little or nothing. If they kill you, it will end up in burial and condolence visit and that’s all. It is only IPOB that can take your case to the international community and the world will hear you.
“The war between us and the Fulani herdsmen has not ended but we’re happy they have not killed anyone in this village. That’s why we are happy that IPOB officials came to this village today. Part of our challenges has been lack of information through media sources like radio concerning the news and message of Biafra,” he stated.
By Chukwuemeka Chimerue, Chief Editor, The Biafra Times
July 23, 2018
The Biafra Times
Publisher: Chijindu Benjamin Ukah