BREAKING NEWS: FULANI/BOKOHARAM SUICIDE BOMBER CAUGHT IN ENUGU WITH A BOMB FOUND IN HIS BODY 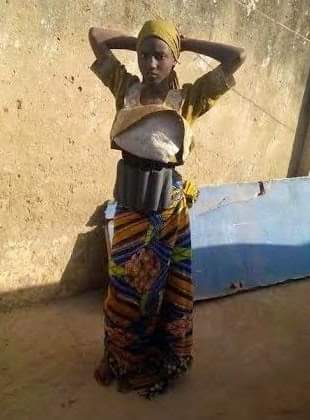 On Wednesday 18th July, 2018. Time:  4:00pm.
A Fulani man who dressed in disguise as female parading himself in the Affor Awkunanaw Market Garriki Enugu Province Biafra land was caught on a mission to detonate a bomb found in his body.
According to an eye witness during an interview by the IPOB media correspondent, he explained that the suspected Fulani dressed up in a female nomadic attire walking in through the market square from the Odu Ime Obodo side towards the yam zone as the people were very busy doing their normal business although rush hour of the market.
Meanwhile due to the kind of suspicious appearance of the man in question. Some guys took it upon themselves courageously to stop the so-called Fulani lady. As they were interrogating her, there was a market woman beside them who sat nearby also observing the movement of the very Fulani person. The woman predicted a statement and said “this person fit be get bomb for him pocket, abeg make una carry ham commot for my shop” meaning that the he might be having explosive device in his pocket he should be moved away from her side.
Suddenly, as God may have it on that same process, another lady who stay at a close range saw a red indicator light blinking from the waist of the suspected Fulani and she screamed out loud, see bomb ooo!!!  Some other women said it could be a small radio light indicator due to the Fulani people usual way of moving around with a radio set.
But those guys insisted to conduct a thorough searching on the suspect. Immediately there was an attempt to search, her hair tie fell off to the ground and behold it was a fully confirmed Fulani man instead of woman he claimed to be on his attire.
And those guys searched on the rest part of his body and discovered that it was a bomb that was tied round his waist body.
Instantly these caused a very high tension inside the market square of Garriki Enugu Province. Every individuals began to run away for their dear lives.
These drew a very high attention of the military men who were around the place to take intervention as soldiers from the nearest 103 battalion Nigerian army barrack in Garriki Enugu as they took the very Fulani man away to their barracks in order to diffuse the bomb from exploding.

As a result of this incident it has led to the exposure of many secretes, that has been going on in and within the market square of Garriki area Enugu ever before now.
Meanwhile Some traders complained with annoyance about the unlawful acts of the new army brigades who has been parading themselves on how they have been displaying some levels of wickedness towards them, among it was the forceful usage of electric energy bulb or otherwise.
They complained about very poor level of the security services.
Recall, that troops of Nigerian Army from 103 battalion Garriki Enugu went and arrested innocent Biafran at Newspaper stand in same area yesterday 17/7/2018 for patronising newspaper that has Biafra written on it.
Pleases stay with us as we ensure to bring more information updates in regards to this.
Written by:
Prince Henry Ikechukwu
For: Enugu State Media