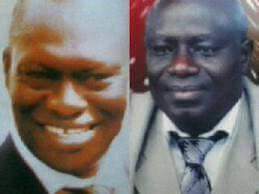 Late CHIEF OKOKON NDEM the ‘Golden Voice’ of #RadioBiafra during the war.
#Heroes #History #Biafra #RadioBiafra
We Remember The Legendary Demagouge & Effervescent Journalist of Biafra Mr Okokon Ndem.
Okokon Ndem was the most popular voice within & outside Biafra during Biafra & nigeria civil war from 1967- 1970.
Okokon Ndem was not the Head of Radio Biafra but Radio Biafra was on his Head
” Onye Ndi iro gbara gburu gburu Na Eche Ndu ya Nche Mgbe Nile” was his popular jingle during the war to keep Biafrans alert. The same jingle re echoes this time around to the Indigenous People Of Biafra (IPOB)
Okokon Ndem used his voice to defeat the federal troops on air even if the battle was lost on the ground.

Okokon Ndem the great Biafran reporter drew a global attention to Biafra.
Okokon Ndem was not from Igbo extraction of Biafra, this legendary journalist hail from Ikeneto in Odukpani Cross River Province of Biafra.
He died in August 2003 & was buried in Calabar on igbo day festival in September 2003.
Our great Leader General Dim Emeka Odumegwu Ojukwu The Head of States of Biafra & other prominent Biafra dignitaries were present at his burial site in Calabar.
We love you so much Mr Okokon Ndem.
May your gentle soul continue to rest in peace in the mighty name of Chukwu Okike Abiama. Iseee !!! Iseee!!! Iseee!!!.
All Hail Biafra.