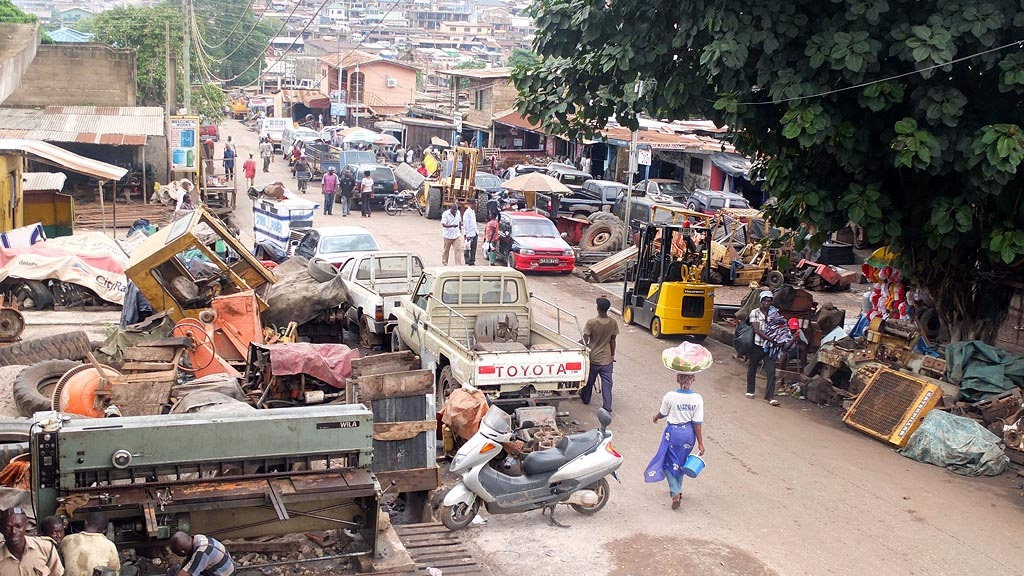 There is brewing tension at Suame Magazine in Kumasi in the Ashanti Region as local retailers have vowed to evict foreigners who operate within the enclave.
The leaders of the Nigerian retailers at the Suame Magazine say their members are living in fear following what they call incessant attacks on them.
It has accused the local retailers and the Ghana Union Traders Association (GUTA) of targeting its members and forcefully evicting them from their shops.
The development comes after the Ministry of Trade and Industry, suspended plans to evict foreigners engaged in the retail trade to allow for sensitization and education in the domestic retail trade sector.
In a Citi News interview, an executive member of the Nigerian retailers Association, Victor Moname, threatened reprisal attacks if the local retailers continue to harass their members.
He said the Ashanti Regional Police Commander deployed some of his personnel to the area to forestall such occurrences but the attacks persist.
“The [Ashanti] Regional [Police] Commander told us that the Nigeria High Commission had called him over the same issue. He said he had sent a police patrol team to Suame Magazine, Kumasi. But when some of our people open their shops, some boys jumped on them again including some of the GUTA executives.”

“Some of their items got broken because when the boys come and ask you to close your shop, and you refuse, they destroy your things. So that was the reason why when they came to tell us to close the shops, we obliged because they are many. They are up to 50, and you can’t identify all of them. They don’t even have shops in Magazine.”
Victor Moname said currently all the Nigerian retailers at Suame Magazine “ had closed our shops including all our workers because they are afraid.”
Garage owners condemn attacks
Meanwhile, the Ghana National Association of Garages has condemned the attacks on Nigerians by some Ghanaian spare parts dealers at Suame Magazine.
At a press conference on Wednesday August 1, 2018, the regional Chairman of the association, Nana Osei Bonsu said though they support the ban of foreigners in retail, the Association frowns on the incessant attacks mounted on Nigerians by some Ghanaians within the artisanal enclave.

This comes after a vow made by some Ghanaian retailers to evict all foreigners who operate within the enclave.
Nana Osei Bonsu also asked the government to amicably settle the issues between the two factions to avoid reprisal attacks on Ghanaians.
Leave our markets now – Gov’t orders non-Ghanaians in the retail sector
Non-Ghanaians in retail trade were ordered to leave the Ghanaian markets by July 27, 2018, or face the wrath of the government.
The Ministry of Trade and Industry which gave the order in a statement threatened to take legal action against recalcitrant non-Ghanaians who fail to adhere to the directive.
But it later did a U-turn on the directive citing inadequate sensitization as the reason for the suspension.
–
By: Godwin Akweiteh Allotey & Hafi

Facebook Comments
Loading...
Related ItemsAfrica
← Previous Story I decamped from APC because they are full of Blood suckers, A party of Sees Killing as Culture – Ortom reveals
Next Story → Suspected Russian spy found working at US embassy in Moscow