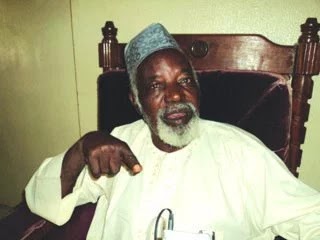 Former governor of old Kaduna State and National Chairman of Peoples Redemption Party (PRP), Alhaji Abdulkadir Balarabe Musa, has called for the zoning of the 2019 presidency to the Igbo . In this interview with Saturday Sun’s NOAH EBIJE in Kaduna, Musa said this has become necessary because the Igbo have been cheated for too long by denying them a shot at the presidency over the years.
The PRP national leader also alleged that Hausa and Yoruba should be held responsible for the political backwardness of the Igbo.
He wondered why the nation’s dominant ethnic groups find it difficult to tolerate an Igbo presidency, adding that the northern elders’ push for a consensus northern presidential candidate for the 2019 polls is all about their personal rather than national interests. He warned that the bid is bound to fail like previous attempts.
Sir, there is a move by Northern Elders Forum (NEF) to adopt a consensus presidential candidate for 2019. Is that a vote of no confidence in Buhari?
Why do we always talk of Northern elders? Who are they, other than fighting for their own personal interest? If they are adopting a consensus presidential candidate, it means a vote of no confidence in one them. But the thing is that why do they always talk of Northern presidency, what about a president from somewhere else other than the North. Why is it always the North? During the Second Republic, the gate-keepers from the West, East and North got the military off our back and got somebody brought by the North because it stopped the military from taking over power. Immediately after the Obasanjo’s regime in 1979, the civilians started planning which group could take over power from the military, with the hope of restraining the military from taking power again. So during Obasanjo’s time, there was agreement that Obasanjo would return power to the civilian in 1979.

Shehu Shagari who said that he did not see himself more than a local
government chairman. But the North, the West and the East conspired and donated the presidency to the North.
They said anybody from the North was okay; and Shagari became anybody from the North. What has the North benefitted from it? Then after June 12, 1993, there was instability without accommodating the South West because the West was not historically strong like the North. The West was perpetually a troublemaker. They have the control of the media, the
professionals and so on. So to bring about unity, the South West has to be consoled; the presidency should be donated to the South West. The North and the South West agreed. And Obasanjo who was not in the picture was picked because of this conspiracy. Obasanjo became the president. Later when they found out that the South South controls the lifeline of the country in terms of oil , and the zone has been kept outside power, the same power bloc of the North, the West and the East, agreed that the South-South should be given the presidency. And Jonathan became the president.  Now, I don’t know for what reason there is the conspiracy again between the North, West, East and even the South South that the power should go back to the North again for countless numbers. Why should we continue with this recycle?

Don’t you think that it is because Igbo are agitating for a republic of their own?

No, it is not because the Igbo were agitating for a republic. Igbo are more
Nigerian than the North or South West in terms of their commitments to the unity of Nigeria . And this is right from 1950s. They are more committed to the Nigeria project. Let’s even talk of tribe; the Igbo are more committed to national unity. They have never expressed separatist tendency, until after the war because of the effect of the war. They have always been for one united Nigeria than the Yoruba and Hausa that have always been secessionists.

Don’t you also think that the case for

Biafra republic is working against the Igbo to take a shot at the presidency?
It was because the civil war hit them badly. The civil war ended over 40 years ago, we should forgive everybody and forge ahead. The Igbo felt not wanted in Nigeria or something like that. So it makes them slow down their commitment to the unity of Nigeria. They became committed to separation. So historically, it is the Igbo that are more committed to one Nigeria. Even now if you take the separatist tendency and look at the separatist tendency in the North by Arewa Consultative Forum (ACF), in the West as represented by Afenifere, and in the East by Ohanaeze Ndigbo, that separatist tendency from the East is not as serious as that of the North and the West. It is easy to compromise once you bring sense of belonging to the Igbo separatists, they will go back to one united Nigeria. But in the case of Northerners, the Hausa and the Yoruba, it is very difficult because of this inhibition. You know, feudal arrangement makes it now difficult to convince the Hausa about the unity of Nigeria.

In view of what is happening in Taraba and Benue States; killings by herdsmen, do you think the North can speak with one voice again?

Forget about the North, they are always deceiving themselves about unity. But talking about power bloc, yes, there is. However there is evidence that they are speaking with one voice in terms of this attitude towards cattle colony. In any case, the ruling class in the North is more hegemonous than the equivalent in the South East or South West. They can easily resolve their differences. They will eventually speak with one voice. You remember when the civil war came, which was brought about by the conflicts between the North, West and the East. But in the end, when you take everything into consideration, the North came together to fight the civil war irrespective of whether they are Christians, Muslims or whatever tag, they came together to fight the civil war. Now, remember when the civil war came, the Ojukwu soldiers virtually represented the whole South East and the South South. They drove away federal forces from that zone. Then Ojukwu, after liberating the South East and the South South, called East then, started emerging towards the South West and Awolowo, the arch opponent of the Northern bourgeoisie became afraid, because the Ojukwu soldiers are now marching towards the West, I think towards Ore. The Biafran forces after liberating the South East began to march towards Ore, which gave Awolowo, who was the arch opponent of Northern bourgeoisie the fear that after all, the Biafra was interested in taking over the entire Nigeria. At this time I was a student in London, so I was free from the Northern inhibition, I was free to speak in terms of one Nigeria. I was aware of the activities in London because of a report that Nigeria’s plans were hatched in London.
It was only Aminu Kano Movement and Tarka Element in the North that was talking about one united Nigeria, the rest northern bourgeoisie were talking about separation. Let the country separate into North, West and East, let everybody take his part. They were thinking like that. But when Awolowo met the Sultan of Sokoto , asking for forces between the North and the South West to counter the Igbo march. Then Aminu Kano’s talakawas became relevant, the Northern bourgeoisie couldn’t do it, they couldn’t listen to South West bourgeoisie to fight Igbo bourgeoisie without consulting Aminu Kano’s talakawas whom they ignored before. They consulted them; and then Aminu Kano made them to understand that keeping Nigeria united was better.
What is your reaction to Obasanjo and IBB’s letters to Buhari?
It is stupid. Nobody should be deceived. They have not performed better than Buhari. In what way have any of them performed better than Buhari. In fact, you can say Buhari is less exposed to so many things like corruption and so on. In the case of PRP, when we supported Buhari right from 2003 when he showed his interest in the presidency, we made it quite clear that of all the people that wanted to rule Nigeria, Buhari was the least risk, we didn’t say he is the most suitable. We said he is the least risk, because the level of his courage and credibility was higher than those who were contesting with him. I dare tell you, even today , if you look at those who want to contest with him, almost all of them came from the North. Take any of them, who among them can you say is credibly better than Buhari, better in performance than Buhari? This is Nigeria’s tragedy. There is no doubt, Buhari has failed, but those contesting power with him are more likely to fail than him. This is the trouble. So we have the task of bringing somebody who can perform better than Buhari. But it is not that easy, because of the leading role of moneybag politics. So how do we get somebody that will perform better than Buhari. I am not campaigning for Buhari. I have never campaigned for him. But this is the truth because we must attach quality to our judgment.
But today, it appears that religion and ethnicity have divided the North.
No. They have not been divided in the North. It has not gone that far yet. Up till now, the North is more hegemonous than the South. Can you imagine now a Yoruba man tolerating an Igbo president, can you imagine it? But a Northerner, Hausa/Fulani from Kano can tolerate a Tiv man becoming the president of Nigeria. Ordinarily, the North is more hegemonous than the South.
Sir, lets go back to the Northern elders, don’t you think they are being selfish and undemocratic about their move for consensus presidential candidate?
They are not united; they are just concerned about their class, and not about the people of the north. That is why they are in this conflict.
What do you think is the way out of the farmers/Fulani herdsmen clashes across the country?
The Federal government must come out clearly on the issue. Everybody, the farmers, the herdsmen have the rights, but they are infringing on each other’s rights, simply because of the neglect of the Federal Government.