Suspected Russian spy found working at US embassy in Moscow 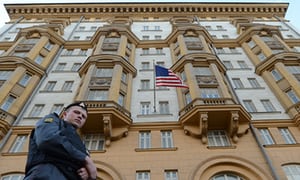 US counter-intelligence investigators discovered a suspected Russian spy had been working undetected in the heart of the American embassy in Moscow for more than a decade, the Guardian has learned.
The Russian national had been hired by the US Secret Service and is understood to have had access to the agency’s intranet and email systems, which gave her a potential window into highly confidential material including the schedules of the president and vice-president.
The woman had been working for the Secret Service for years before she came under suspicion in 2016 during a routine security sweep conducted by two investigators from the US Department of State’s Regional Security Office (RSO).
Congress is focusing on Russian hackers when it is possible all of the information they needed came from the internal breach
They established she was having regular and unauthorised meetings with members of the FSB, Russia’s principal security agency.
Advertisement
The Guardian has been told the RSO sounded the alarm in January 2017, but the Secret Service did not launch a full-scale inquiry of its own. Instead it decided to let her go quietly months later, possibly to contain any potential embarrassment.

 
Sign up for Guardian Today US edition: the day’s must-reads sent directly to you
Read more
An intelligence source told the Guardian the woman was dismissed last summer after the state department revoked her security clearance. The dismissal came shortly before a round of expulsions of US personnel demanded by the Kremlin after Washington imposed more sanctions on the country.
The order to remove more than 750 US personnel from its 1,200-strong diplomatic mission is understood to have provided cover for her removal.
“The Secret Service is trying to hide the breach by firing [her],” the source said. “The damage was already done but the senior management of the Secret Service did not conduct any internal investigation to assess the damage and to see if [she] recruited any other employees to provide her with more information.
Advertisement
“Only an intense investigation by an outside source can determine the damage she has done.”
Asked detailed questions about the investigation into the woman, and her dismissal, the Secret Service attempted to downplay the significance of her role. But it did not deny that she had been identified as a potential mole.
In a statement, it said: “The US Secret Service recognizes that all Foreign Service Nationals (FSN) who provide services in furtherance of our mission, administrative or otherwise, can be subjected to foreign intelligence influence.
“This is of particular emphasis inRussia. As such, all foreign service nationals are managed accordingly to ensure that Secret Service and United States government interests are protected at all times. As a result, the duties are limited to translation, interpretation, cultural guidance, liaison and administrative support.

“It was specifically the duties of the FSN position in Moscow to assist our attaches and agency by engaging the Russian government, including the Russian Federal Security Service (FSB), the Russian Ministry of the Interior (MVD), and the Russian Federal Protective Service (FSO) in furtherance of Secret Service interests.”
Advertisement
It said: “At no time, in any US Secret Service office, have FSNs been provided or placed in a position to obtain national security information.”
The state department said it would not comment “on allegations related to intelligence or personnel matters, and we have no information for you on this alleged incident.”
But it said it was aware “that US government employees, by virtue of their employment with the US government, may be targeted by foreign intelligence services … when we identify an employee in violation of security directives, we take appropriate action at the appropriate time.”

The Secret Service is a US federal law enforcement agency that sits within the Department of Homeland Security and has more than 150 offices worldwide. Its mission, it says, is the “protection of the nation’s leaders and the financial and critical infrastructure of the United States”.
 
A Secret Service agent stands guard as a helicopter carrying Barack Obama prepares to land in New York in 2015. Photograph: Saul Loeb/AFP/Getty Images
The discovery of a suspected FSB mole on its staff within the US embassy in Moscow would be hugely damaging to its reputation and could have severe consequences for the safety of other Secret Service staff and those it is mandated to protect.
Advertisement
The Guardian has been told the name of the suspected spy and her job title within the agency. She did not respond to numerous email requests to discuss her role at the embassy or the allegations made against her.
It is understood she came under suspicion two years ago during a routine review of Secret Service personnel in the so-called Paris district of the agency, which includes Moscow, London and Frankfurt. The RSO reviews take place every five years.
With a role that gave her an insight into ongoing Secret Service investigations, the woman had access to the Secret Service intranet, its internal email and its counterfeit-money tracking system.
A source claimed “her frequent contacts with the FSB gave her away … numerous unsanctioned meetings and communications”.
The Guardian has been told the state department’s resident agents in charge alerted the Secret Service in January 2017 and at least nine high-ranking Secret Service officials became aware of the findings.
Advertisement
At the time, separate CIA and FBI inquires were also under way, but it appears the Secret Service was expected to take the lead. It failed to do so, according to a source.
“She had access to the most damaging database, which is the US Secret Service official mail system,” the source said. “Part of her access was schedules of the president – current and past, vice-president and their spouses, including Hillary Clinton.”
She had plenty of time to gather intelligence without supervision, the source said. “Several employees interacted with her on a personal level by emailing her personally on a non-work account. This isn’t allowed.”
The Department of Homeland Security was apparently notified about the case but it is unclear how much detail was passed on to officials outside the agency. It is also unclear why the woman, a Russian national, was hired by the Secret Service in the first place or what kind of vetting took place.
The Guardian has been told that the potential breach was not reported to any of the congressional intelligence or oversight committees.
Advertisement
A source said: “A government committee needs to investigate the Secret Service for hiding this breach.”
Another option would be to include it in special counsel Robert Mueller’sinvestigation into suspected Russian collusion in the 2016 presidential election.
“The US Congress is focusing on Russian hackers when it is possible that all of the information they needed to get into the system came from the internal breach in the Secret Service,” the source said.

“Her activities of stealing and sharing information could shed more light on how the Russians were able to hack the 2016 presidential election office of the DNC [Democratic National Committee].”
They added: “I think that the special counsel would be the perfect outside entity to investigate the level of damage that [she] caused. They have access to all types of counterintelligence information and they wouldn’t lie … to avoid reporting this serious operational and security breach.”
Additional reporting by David Smith in Washington
Source: The Guardian