Home / News / I Have No Hand In The Military Operation Python Dance,And I Told Buratai That His Evidence Against IPOB Lack Merit – Nnia Nwaodo Lament

I Have No Hand In The Military Operation Python Dance,And I Told Buratai That His Evidence Against IPOB Lack Merit – Nnia Nwaodo Lament 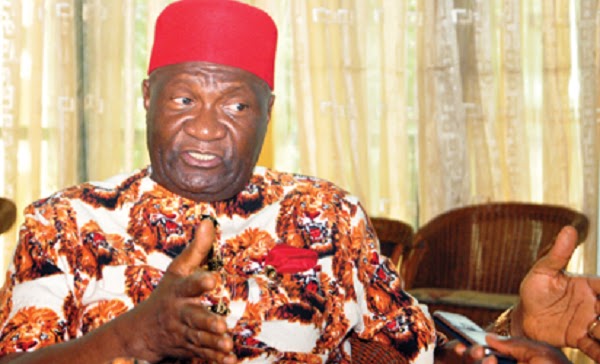 ENUGU – The President-General of the umbrella Igbo socio-cultural organisation, Ohanaeze Ndigbo, Chief John Nnia Nwodo, has stated that contrary to beliefs in some quarters, he has no hand nor input in the Operation Python Dance II conducted by the Nigerian Army last year September which claimed many innocent lives of members of the Indigenous People of Biafra, IPOB.

Speaking on Friday August 3, 2018 in Enugu, at a symposium on “Quest for self-determination by ethnic nationalities; way forward for peaceful coexistence in Nigeria,” organized by Movement of Biafrans In Nigeria, MOBIN and co-hosted by the convener, South East Elders Forum, Dr. Dozie Ikedife, Nwodo who condemned the military exercise said he was assured by the military along with South-East governors that they were only coming to rid the region of sundry criminal activities to ensure safety of lives and properties of citizens.
He, however, expressed surprise when the military invaded Umuahia, the hometown of the IPOB leader, Nnamdi Kanu and slaughtered some IPOB youths, alleging that they created a paramilitary outfit known as Biafra Security Service, BSS and that they confiscated a gun belonging to a police officer.
According to the Ohanaeze President, when he inquired from the Army about the bloodshed and violence that erupted in Abia state, they swiftly accused IPOB of creating BSS whom they said were conducting “guard of honour” on uniforms every morning at the entrance leading to Kanu’s house which attracted the attention of the duo of Abia State Commissioner of Police and the Assistant Inspector General of Police, AIG, who passes the road every morning when going to work.

“When they (Army) wanted to commence the second operation, we asked them why they’re coming back again to carry out the same military operation and they said it’s just a military exercise.
“But serious problem erupted in Umuahia at the peak of that second military operation and we called them for questioning and they told us, in fact the Abia state governor was there, that before they ventured into Umuahia, IPOB has what they call Biafra Security Service; that they wear uniforms and conduct guards of honour every morning at the entrance road leading to Nnamdi Kanu’s house which is also the same road the commissioner of police in the state and AIG passes while going to work each morning.
“This was exactly what they told me. I’ve never been there to find out the truth about what they said and I haven’t seen them myself,” Nwodo stated.
He said the information he received noted that one establishing “a paramilitary service that wears uniform without due legislation of the Abia state House of Assembly is illegal under them and they begged them to stop but they refused.

“The worst scenario was when they told me that a police officer who was on duty and returning from the house of AIG and passing through that road and the Biafran youths stationed at that axis snatched away his gun but they told us the gun was later handed back to them.
“If you listened to some of the things I said in the past, you’ll find where I have alluded to some of these representations because the Attorney General of the Federation went to court and said that IPOB is a terrorist organisation.”
The Igbo leader further explain how he approached Transparency International and called for the setting up of an independent judicial commission of inquiry to investigate the killings of some IPOB members at Rivers state during IPOB-Trump solidarity rally.
“When we were sworn in as the executives of Ohanaeze, in the first speech I made, I said that they (IPOB) are my children and that their struggle is my struggle as well.
“I told (Lt. Gen. Tukur) Buratai(COAS) to establish a judicial commission of inquiry into the killings that happened at Portharcourt. I sent members of my executives to Portharcourt. They went to all the mortuaries and graveyards where dead members of IPOB were buried and they took pictures of them for the records.
“And I told the Army chief, let’s exhume all these dead bodies and also bring those from the mortuary to serve as evidence but they vehemently refused. So, I went to Transparency International.
They conducted an independent inquiry and released a report that 191 people were executed without trial.
“As soon as that report was issued, the chief of army staff, COAS, then decided to set up an inquiry peopled by retired and serving officers of the Armed Forces, none of whom were Igbos. I challenged him and said Buratai, you cannot be a judge in your own matter.
“I told him that the rules of natural justice demands that you must listen to both sides of the story. In this case, they must listen to IPOB and those who fired the shot as well so we can know who is saying the truth.
I stated that the Army will not after killing us, go ahead to constitute a panel of inquiry by themselves. That means they’re judges in their own case. No other Igbo man apart from me said this directly to the COAS,” he added.
Nwodo also faulted the procedures adopted by the federal government in the proscription and designation of IPOB as a terrorist organisation, saying the evidence they provided in court lacks merit and not enough to establish IPOB as terrorists.
He said: “Buratai went to court under our law; the government does not require an open court to consider a group, a terrorist organisation. What he only needs to do is to go to the office of the judge; there’s what lawyers call an interlocutory action, and tender an evidence in front of the judge saying that this person or group is a terrorist organisation and if after going through the evidence, the judge can now make a decision.

“But Buratai went to a judge in Abuja and deposed exactly what they earlier told me and the governors that IPOB youths are using force to snatch guns from security officials and that IPOB is a terrorist group.
And I came out in the newspapers and told Buratai that the evidence he tendered in court may be enough to establish a criminal act but not enough to classify IPOB as a terrorist organisation. Nobody else said it apart from me.
“I also went to the British Institute of International Affairs popularly known as Chatham House and told the whole world that Fulani herdsmen is the 4th most terrorist organisation in the world as categorized by Global Terrorist Index and I gave reference to the source of this discovery, yet they have not classified Fulani herdsmen as terrorists but my children (IPOB) are called terrorists.
“So my brothers, those we’re fighting against has the determination to contain us.
That is why if conventional warfare fails, you have to try guerrilla warfare. Therefore, if the style we employ in this fight fails, let’s try diplomatic style. Let’s learn how to apply our senses in whatever we do.”
…As Book launch, “What The Ibos Want,” takes centre stage at the event
One of the major highlights of the event at Enugu on Friday was the launching and presentation of a book written by Barr. Emeka Emekesiri, entitled: “What The Ibos Want.”
The book which was presented in 360 pages and 17 chapters was reviewed at the symposium by an Igbo elite and Professor from the University of Portharcourt, Mark Anikpo.
According to Prof. Anikpo, “the main purpose of the book is an effort to put record and also bring to light for the new generation of Ndigbo and for all and sundry, not only the almost eclipsed barbarism of the Nigerian state but also the treachery and double standards of the United Nations in its reluctance or even refusal to bring to justice, the Nigerian perpetrators of genocide against Biafra.”
He noted that the author of the book, painstakingly documented the Biafran case in a most graphic and convincing detail, adding that the facts are verifiable and the sources culled from libraries and museums all over the world, especially in the United Kingdom and the United States of America.