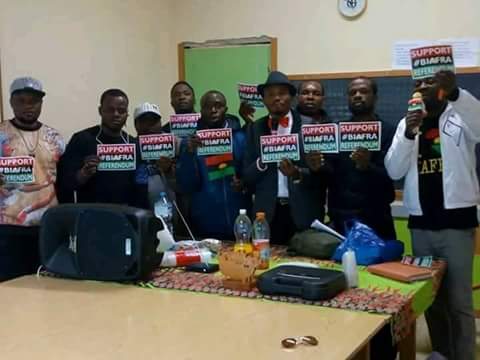 The male sheep called his children together and asked them a very tricking question, ” my children, how many times will you be hurt before you learn your lessons” one said two, another said three but it was the youngest of them that said he will learn from what happens to others.
Biafrans how many times do you want the Hausa Fulani oligarchy to prove to you that Nigeria is their forefathers’ inheritance?
During the war, some Biafrans from the coastal regions were turned against their brothers in the hinterland and used them as a willing tool to massacre their own.

The middle Beltans were the major tools used by same Fulani people to wage a war of conquest on the peace-seeking Biafrans and today the tide have eventually changed and even those who fired the first and last bullet on Biafrans civilians are being massacred by the masters that sent them.
One would think that after helping Fulani to massacre Biafrans, that the middle Beltans would be rewarded with developments and governmental positions
One would think that the Niger Delta today will be in control of Nigerian economy or at least be gaining from the system after they formed good allies against their brothers
But the reverse is the case, the middle Beltans are being paid with blood, they are been massacred in their numbers, slaughtered for not given up their land to Fulani herdsmen
Some Niger deltas who never learn from history are been paid with further pollution of their land. Military siege under different crocodile names and codes.
Biafra referendum surfaces in such a hard time to once again pave way for Biafrans and some other minorities that have no say on Nigeria.

We Are Angry With Buhari's Government, Says Emir Of Daura