God Forbid I Can Never Back Atiku's Presidential Ambition 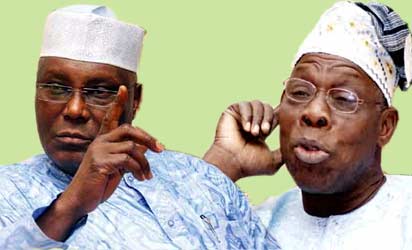 Obasanjo , in an interview with Premium Times , said God will never forgive him if he backs Atiku’ s presidential ambition .
Atiku served as vice- president to Obasanjo from 1999 to 2007. He aspired to succeed Obasanjo in 2003 but the elder statesman went ahead to complete another term.
By 2007 when Obasanjo ’ s second term ended , both men had fallen apart. Obasanjo ’ s alleged third term agenda was also said to have worsened their dispute.
Obasanjo said he has no personal grudges against Atiku but only works with anyone “ working for the good of Nigeria ” .

He said , “ If I support Atiku for anything, God will not forgive me. If I do not know , yes. But once I know , Atiku can never enjoy my support. ”
“ It is not a question of working with or not working with an individual . If you are working for the good of Nigeria , I am working with you . If you are not working for the good of Nigeria , it does not matter who you are , I am not working with you .
“ I do not have personal grudges with anyone . If you do not do well for Nigeria , you do not do well for all of us . ”
He added that his opposition to Atiku’ s ambition is only within the political sector and does not translate to other spheres of their lives .
“ If my children are getting married , he would send representatives. When his children are getting married , I use to send representatives. That is social . That is not political . ”
He added , “ on political ground , my position has not changed. If I support Atiku for a political office other than the one I supported him in the past when I did not know him … God will not forgive me” .