Home / News / Presentation Of Nigeria As A Country Is A Disgrace And Will No Longer Be Acceptable, Let Conducte Referendum – Annkio Briggs Blasts

Presentation Of Nigeria As A Country Is A Disgrace And Will No Longer Be Acceptable, Let Conducte Referendum – Annkio Briggs Blasts 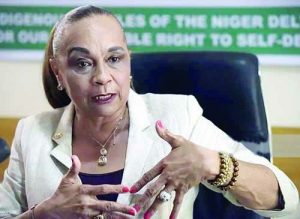 Niger Delta activist and former Minister for environment, Annkio Briggs, has said that it is time to put Nigeria’s unity to a referendum.

She said that the continue presentation of Nigeria as a country has become a disgrace and will no longer be acceptable.
Briggs made the statement following report that Boko Haram terrorists who abducted Chibok School girls in 2014 has been arrested by the Police.
Recall that the Nigerian Police on Wednesday announced that it have arrested 22 Boko Haram members who involved in the abduction of Chibok School Girls’ in Borno in 2014.
Briggs reacting in a social media post obtained by Orsu24news, questioned the authenticity of the said arrest of Boko Haram memebers by the police.
She asked if Nigerians are fools or the Federal Government.

She said how come the terrorists who outsmarted Nigerian Army for over four years became so easy for Nigerian Police to arrest.
Briggs wondered why the Federal Government indulge in feeding the public with information at will.
She said that the presentation of Nigeria as a country has become a disgrace and will no longer be acceptable.
She said that the desire to continue to stay as one Nigeria needs to be put to a referendum.
She said that all ethnic nationalities must have a say in politics and religious issuies in the country.
She urged Niger Delta and other Ethnic Nationalities to rise up and make a choice, and not to allow few people to tell them that they represen them without consulting them.
Her Post Reads: “Who are the fools? Nigerians or the FG ?”
“After 4 years finally the children (at the time of abductiing the Chibok girls, they were 4 years younger) that over smarted Nigeria Army and abducted nearly 300 girlsare caught by the Nigeria police.”

“The representation of Nigeria as a country is a shame, adisgrace and no longer acceptable. And Niger Delta continued desire to stay on needs to be put to a referendum.”

“Niger Delta Ethnic Nationalities must rise up in their communities and make their choices.”
“We must not allow a few people to tell us they are representing us without consulting us.”
“We must have a say in the ongoing political and regional discussions and consultations for alliances, status quo, representing, self-determination and possible exit.”
“Nigeria ia at the point of eventual and total failure.”
The people must have the last and final say for their today and future.”
Facebook Comments
Loading...
Related ItemsNewsNigeria
← Previous Story God Forbid I Can Never Back Atiku's Presidential Ambition
Next Story → How Can We Grow Our Economy If We Give To Others What They Do Not Give To Us – Bruce Speaks