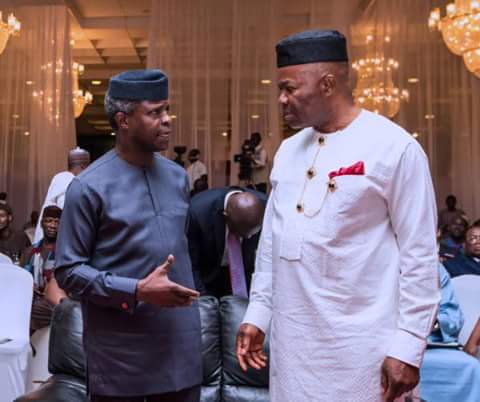 Senate Minority leader and a former governor of Akwa Ibom State, Godswill Obot Akpabio met with the Vice-President, Prof Yemi Osinbajo in Abuja on Thursday.
Senator Akpabio arrived the State House Villa around 3.06pm, in the company of Senator Ita Enang, the Presidential Aide on National Assembly (Senate).
According to a source who spoke with Nigeria Today, the meeting was arranged by Senate Ita Enang who is bent on lobbying the Senate to reconvene and consider president Muhammadu Buhari request on INEC budget and other relevant matter.
The source disclosed that the Presidency wants the Senate to reconvene as soon as possible and they think Akpabio as the minority leader can intervene and advised the Senate president Bukola Saraki to call back the Senators.
“I can tell you, president Buhari is very worried that the Senate will not resume until September 25, there are so many things they need to look into which may spell doom for the country if they don’t reconvene as soon as possible.
“Senator Ita Enang is good at his job and he is doing everything possible to lobby opposition Senators which Akpabio is the leader to advise Saraki to call back the Senators”

The Source noted that president Buhari gave Ita Enang a matching order to work with the Vice-President and ensure that everything was brought under control before he returned back from London.
Many media houses have rumoured that Senator Akpabio was about dumping the PDP, they even concluded that Akpabio- Osinbajo meeting was to finalise his defection to APC.
A top PDP source who spoke with Nigeria Today liken those media houses to fake news merchant who are spreading rumours, not news.
“There is no iota of truth in the report, Akpabio that we know cannot dump PDP, it’s sad that Nigerians cannot see the handwriting in the Wall, this news has been on since 2016
“They say Akpabio is having issues with Udom, that’s a big lie,
“Some people are insinuating that the APC are using EFCC to threaten Akpabio to decamp, that’s another lie. APC is a party of lies”
The source added that Akpabio is very comfortable with the PDP and would not want to jeopardise that for anything

Facebook Comments
Loading...
Related ItemsNewsNigeria
← Previous Story I'm Convinced that something is Wrong With You, Stop Praising Buhari and Join your Family – Actor Joseph Okechukwu, Nollywood Actor Blasts Kenneth Okonkwo
Next Story → BREAKING!!! Herdsmen Are Not Responsible For Killings In Nigeria , They Just Turned The Truth Upside Down To Portray The Administration Of President Muhammad Buhari In Bad Light – Oshiomhole Reveals