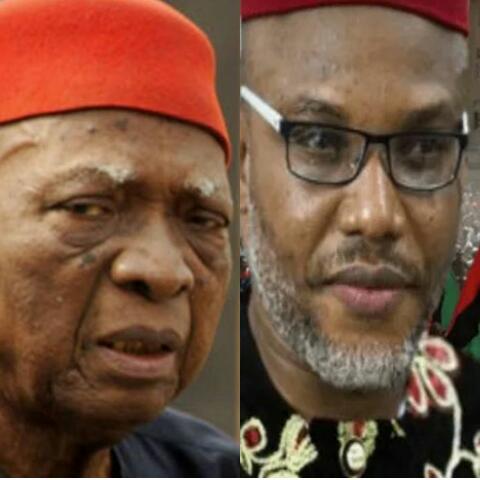 Nwabueze, who had previously hosted a similar meeting between the two bodies in Enugu, observed that leaders could only be relevant if they carried their people along, adding that Igbo people could not afford to be disunited at this crucial period in Nigeria.
The Atani meeting, which was held behind closed doors, was attended by the Dr Nnia Nwodo, president general of Ohaneze Ndigbo, Chief Nnia Nwodo, emeritus dean of Church of Nigeria , Anglican Communion,
Most Rev Maxwell Anikwenwa and Mr. Aloy Ejimakor, counsel to IPOB who represented the organization.
Nwabueze, who briefed reporters after the meeting, emphasized the need for unity, adding that “we will not be united if followers are disenchanted with the leadership.”

Though he did not give full details, he told journalists that the meeting was a fruitful one, and that IPOB asked for the federal government to rescind its decision to proscribe it.

He also said that Ohaneze Ndigbo and other leaders of the zone resolved to hold another meeting with South East governors to pressure on the federal government to de-proscribe he pro-Biafra group.
He said:
“There is trouble in Nigeria. We do not know what will happen in future because we are not prophets , but we can predict and we know there is problem.
“We love Nigeria, but the leaders of the nation are not doing the right thing. We are not in control of anything in Nigeria.
It is for this reason that we need to come together and be united. “We have no control of anything in Nigeria and if we lose control of ourselves, we are finished and we will not let it happen while we are still alive.”
According to him, the essence of the gathering was to make everyone understand the need for peace to reign among the people. “Their (IPOB) major worry was to get the federal government to lift its proscription order on them.
We have promised to liaise with the state governors to do so in a later meeting that will hold on August 8,” he said.
On the quest for Igbo presidency, Nwabueze said that people of the South East of
Nigeria were not interested in the presidency of the country, insisting that its quest was to have Nigeria restructured.
“The primary need of Ndigbo now is restructuring not Igbo presidency. We want a restructured Nigeria because that is the only way we get what we want, and every zone would be satisfied.
If
Nigeria is restructured, that will go a long way to satisfy our demands.
“We don’t want Igbo presidency.
As the country is today we cannot get anything until Nigeria is restructured. We can begin to talk about Igbo presidency only when Nigeria is restructured,” Nwabueze further said.