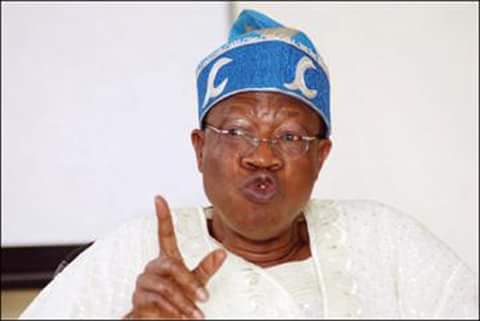 The Minister of Information and Culture, Lai Mohammed, says President Muhammadu Buhari’s integrity remains intact, in spite of the allegation of certificate forgery against his Minister of Finance, Kemi Adeosun.

Mr Mohammed said this on Monday when he paid an official visit to the Abuja office of The Authority Newspaper.
Responding to a question from the editorial management of the paper on why Mr Buhari was still keeping Mrs Adeosun in his cabinet, Mohammed said the case was still under investigation.
He said the appropriate agencies were still investigating the allegation against the finance minister and should be allowed to do their jobs.
Mrs Adeosun was alleged to have forged a National Youth Service Corps exemption certificate.
“Until when an allegation is proven, you do not expect the President to act.

“The appropriate agencies have spoken and they say they are investigating. The only thing we can do is to wait.

“By saying that the minister should resign or be sacked while investigation is still ongoing may also not be feasible in our clime because of the level of false accusations.
“How many times have they accused me of embezzlement? Even recently, they said my driver jumped out of the car, abandoned me and decamped to PDP.
“People even made the allegation that President Buhari did not have certificate.’’
The minister insisted that the president will be usurping the powers of the investigating agencies if he sacked Adeosun before their reports.
“For instance, people have come to me that so and so TV and Radio stations are spreading fake news and I should shut them down.
“I told them that I do not have the power to do so; it is the responsibility of the National Broadcasting Commission, even though it is an agency under my watch.
“We are as concerned as you are; but having spent some time in government, you will see that a lot of lies are being peddled about us.”
Mr Mohammed gave an assurance that the government would not sweep the matter under the carpet.
The minister also responded to the report in some quarters that the government would share to the poor the Abacha loot repatriated by the Swiss Government, describing the insinuation mischievous.
“When the first tranche of Abacha loot was paid under former President Goodluck Jonathan, the Swiss Government found out that the money was re-looted by those in the administration.
“So, when they wanted to release the next tranche, they put the condition that it must be used for the most vulnerable Nigerians.
“We said there is no problem. It is the money we are using to finance our social investment programmes comprising four components.’’
Mr Mohammed further said that 8.5 million pupils in government schools across the country were currently being fed under the Home Grown Feeding Programme.
Similarly, he said that over 400,000 families were being paid stipends of N5,000 every month under the Conditional Cash Transfer Programme.
“The beauty of this programme is that it is being done in collaboration with the World Bank.
“It is the World Bank and various agencies that determine the beneficiaries and who are the most vulnerable Nigerians.’’
Mr Mohammed said part of the money was being used to finance the employment of young graduates through the N-POWER programme.
He said no fewer than 200,000 people had been employed in the first batch and another 200,000 would be resuming very soon.
“The fourth is the Government Enterprise Empowerment Programme whereby, market women, craft people etc. are given loan between N50,000 and N100,000
“So, when we say this money is being used for the poor people, it is not as if we are sharing it to poor people in the states,’’ he said.
Mr Mohammed said the Buhari administration would remain accountable and committed to the welfare of the common people.