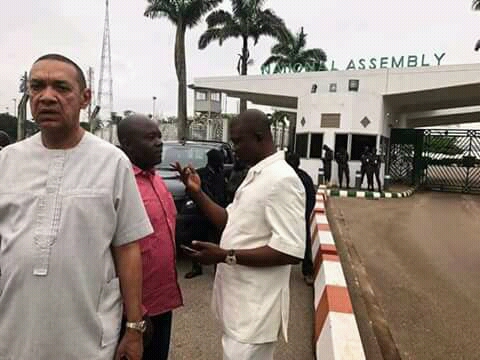 Senator Ben Bruce on Tuesday condemned the invasion of the National Assembly by security agencies.
Daily Post Reported the massive reinforcement at the entry, exit and within the premises.
Speaking to newsmen, Bruce described what was happening as “a coup”.
The lawmaker vowed that he and his colleagues (pro-Saraki Senators), would report President Muhamadu Buhari, Department of State Services (DSS), the Nigeria Police among others to the international community.
“You can all see what is happening. Please get me names and photographs of any of the security agents you see. Let no one test me or this institution”, he said.

“And for all those behind this, the anti-democratic forces, we will report all of them to embassies in Nigeria. I am in touch with them already and they are waiting.
“They, their wives and kids will not be allowed to enter Europe and North America. Tomorrow we will write to London, Washington, the EU, Canada.”
Meanwhile, the crowd at the entrance of the country’s legislative complex is increasing.
More staff and aides to lawmakers have been arriving but cannot gain access.
The siege is alleged to be part of the
plot to effect a change of the Senate leadership.

No One Is Save From This APC Government, All well meaning Nigerians should stand up against this dictatorship Before Is Too Late – Wike Speaks