Tension Hits Nigeria As UN Warns Nigeria, Others Over Killings Against Innocent Citizens 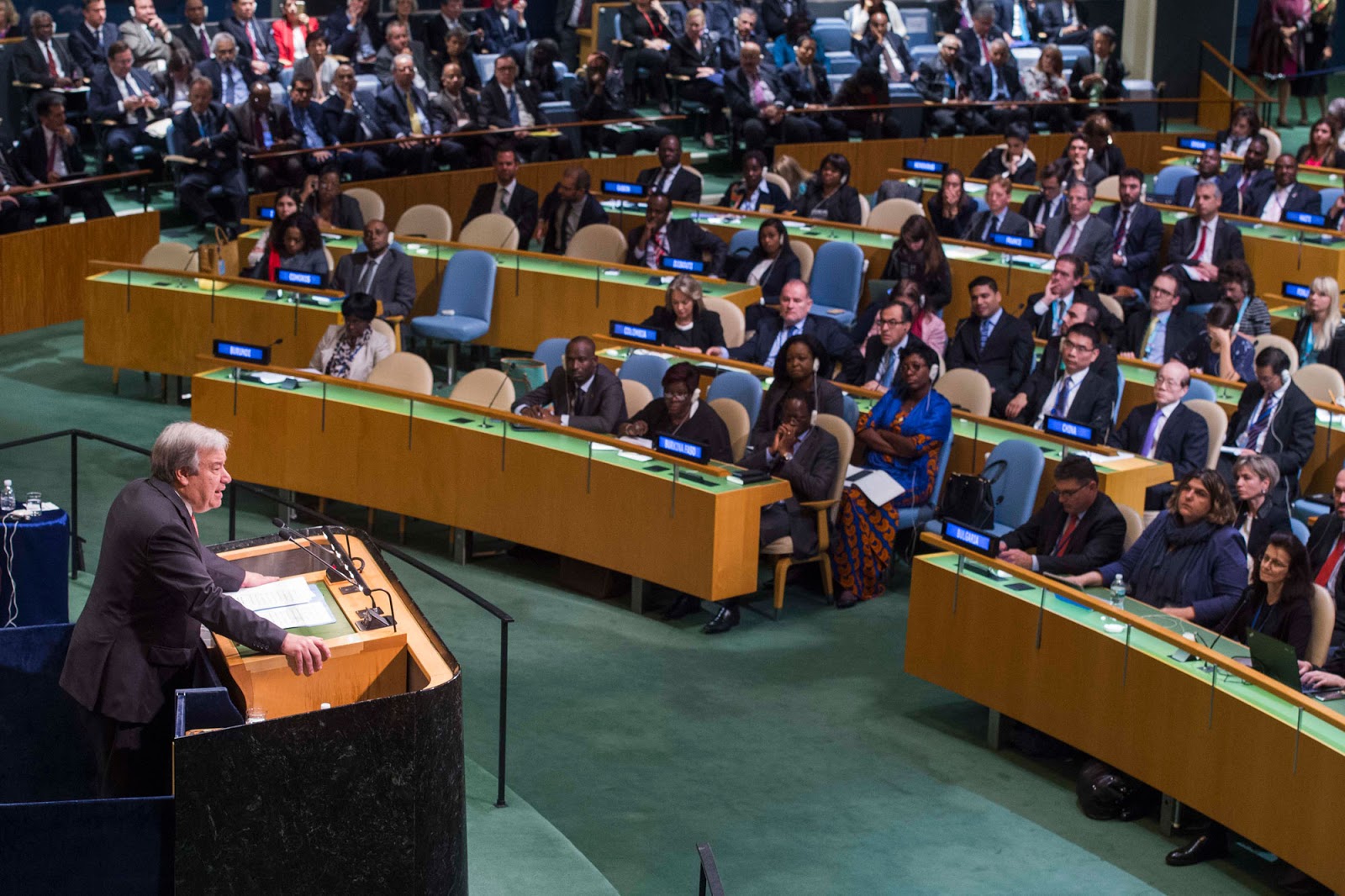 Global body in charge of security, United Nations Security Council, says it is worried over what it described as continued tensions linked to disputed electoral processes, social and economic difficulties, and conflicts between farmers and herders in the Lake Chad Basin.
Nigeria, Cameroon and Chad are members of the Lake Chad Basin on which the UN body also said it remained concerned at their security and humanitarian  situation caused by Boko Haram and other armed groups. Lawmaker, Goodhead confronts DSS operatives on illegal invasion of NASS The body spoke in a Presidential Statement released, yesterday, on the heels of last Tuesday’s siege on the National Assembly by Nigeria’s secret police, the Department of State Service (DSS). Acting President Yemi Osinbajo had fired the DSS Director General, Mr Lawal Daura, following the siege which attracted condemnation from across Nigeria.
Some international bodies, including the European Union, EU, also condemned the National Assembly invasion. The siege had been interpreted in some quarters as part of the moves by the ruling All Progressives Congress (APC) to remove Senate President Bukola Saraki, who had defected  to the Peoples Democratic Party (PDP), through the backdoor.
Another school of thought said the siege was staged by the Senate President, in conjunction with the DSS, to attract sympathy to his person and make the administration of President Muhammadu Buhari look bad in the eyes of the democratic world. Meanwhile, the cat and mouse game between the leadership of the National Assembly and the Presidency to get the federal lawmakers to reconvene and approve the supplementary budget of the Independent National Electoral Commission (INEC) for the 2019 general elections continued, yesterday, as indications emerged that the lawmakers may not meet this week. The lawmakers had gone on recess late last month and are not due to return to parliament until late September. Terrorist activity In a Presidential Statement, the 15-member UN Security Council  regretted that Central African countries were beset by ongoing terrorist activity, instability and the effects of climate change, and asked Secretary-General Antonio Guterres to review the work of the UN Regional Office for Central Africa (UNOCA), and recommend areas for improvement. Saraki The presidential statement read: “The Security Council strongly condemns all terrorist attacks carried out in the region, including those perpetrated by Boko Haram and the Islamic State in Iraq and the Levant (ISIL, also known as Daesh).
“These attacks have caused large-scale and devastating losses, have had a devastating humanitarian impact including through the displacement of a large number of civilians in Nigeria, Cameroon and Chad, and represent a threat to the stability and peace of West and Central Africa.
“The Council notes with particular concern the continuing use by Boko Haram of women and girls as suicide bombers, which has created an atmosphere of suspicion towards them and made them targets of harassment and stigmatisation in affected communities, and of arbitrary arrests by security forces.

“The Council emphasises the need for affected States to counter-terrorism in all its forms and manifestations, including by addressing the conditions conducive to the spread of terrorism, in accordance with obligations under international law, in particular international human rights law, international refugee law and international humanitarian law”.
The Security Council welcomed the support provided by UNOCA and the UN Office for West Africa and Sahel (UNOWAS) for the development of a joint regional strategy to address the root causes of the Lake Chad Basin crisis through regular contact with regional leaders. The Council encouraged partners to increase security assistance to Lake Chad Basin Commission countries, and humanitarian and development support across the region for those affected by Boko Haram activities.
“The Security Council remains deeply concerned at the grave security situation and related violations and abuses of human rights in parts of Central Africa, in particular the continuing terrorist activities of Boko Haram and other terrorist groups in the Lake Chad Basin,” it said.
“The Security Council expresses its ongoing concern at continued tensions linked to disputed electoral processes, social and economic difficulties, and conflicts between farmers and herders,” the statement added. The 15-member Council noted that UNOCA’s priorities would include to work closely with UNOWAS to address transregional issues such as maritime security in the Gulf of Guinea, conflict between farmers and herders, and combatting Boko Haram. The UN Security Council committee on al Qaeda sanctions blacklisted and imposed sanctions on the Islamist militant group Boko Haram in 2014 after the insurgents kidnapped more than 200 Chibok schoolgirls. The designation, which came into effect after no objections were raised by the Security Council’s 15 members, subjected Boko Haram to UN sanctions, including an arms embargo, asset freeze and travel ban.
Daura The National Assembly was under pressure, last week, to reconvene to consider the budget to enable INEC prepare for the forthcoming polls. The leadership was scheduled to meet INEC National Chairman, Prof. Mahood Yakubu, ahead of the reconvening, last Tuesday, but the DSS siege aborted the meeting. The meeting, nonetheless, held on Wednesday. Uncertainty about resumption The word out there, late last week, was that the House of Representatives will reconvene this week, specifically on Tuesday, to approve the INEC supplementary budget. But an associate of the Senate President, Saraki, told Sunday Vanguard, yesterday evening, that he could not say whether the National Assembly would sit this week.

“I have not heard about reconvening when they are still plotting their evil schemes. We know that once the Senate is reconvened that they would find ways to block Saraki and Ekweremadu from coming to the session and force a President Pro-Tempore from their camp to do their illegal bidding”, the associate said. Whereas to remove a Senate President, the requirement is two-third of the Senate, representing 73 senators, in the absence of the two presiding officers, a President Pro-Tempore can be elected among those present to preside over the affairs of the Senate for a limited number of days. “That is their plan and we cannot be at peace with that.”
Sunday Vanguard gathered, yesterday, that 39 senators had  signed  a petition to remove Saraki and his deputy, Senator Ike  Ekweremadu, from office. Senator Ahmad Lawan, Senate Majority Leader, is believed to have been tipped by those opposed to Saraki as Senate President, Senator Sunny Ogbuji from Ebonyi State as Deputy Senate President and Senator George Akume penciled down as Senate Leader under the proposed scheme allegedly in the works by the APC camp. The ruling party National Chairman, Mr Adams Oshiomhole, however, remained unsparing of the Senate leadership, yesterday, as he insisted that resistance to reconvene was a bid for political self- preservation by the Senate President. He affirmed that Saraki  could not  continue to shift the evil day. “If they are actually representing Nigerians, they are supposed to reopen to deal with the issue with the supplementary budget and other presidential bills before them which are urgent,” Oshiomhole said yesterday through his spokesman, Simon Ebegbulem.
Responding from the camp of the Senate President, Senator Rafiu Ibrahim, who recently defected from the APC to the PDP, said they would not bother wasting words on Oshiomhole. “For him to have any say in the affairs of the National Assembly, he should resign his position as the National Chairman and  contest to become a senator and not to keep on talking about his bloated ego”, Ibrahim said. Rise to defend democracy – Pro-Saraki Group In a statement, yesterday, a pro-democracy group, Democratic Nigeria, pleaded with Nigerians to rise and defend the nation’s fledgling democracy. Speaking against the backdrop of the siege in the National Assembly, last Tuesday, the group said: “In the last three years of the 8th NASS, so many illegalities have been prevented, many of which have not really gone down well with the executive arm. Uncovering of alleged corruption in NNPC, the Nigeria Police Force with the IGP as major culprit, to Kenton, among many others in government agencies and institutions.

“It is on public record that none among the past NASS had been severely subjected to attacks and disregard by agents of the state like the present Senate, yet it is surviving, probably because those at the helm of affairs presently, do not hold the notion that their representation is solely about themselves, but see themselves as custodians of the people’s will and defenders of the people’s Commonwealth. “Whichever side of the divide we belong, we must not only condemn shenanigans and illegality when it does not favour us, legality is not a matter of fair-weather, it must be legal at all times notwithstanding who is involved. We saw it and condemned it when the Judiciary was at the receiving end, with the invasion of their homes in a Gestapo fashion, by agents of the State Security Service (SSS) at midnight. Now that it is wearing another toga against the NASS, we must not suddenly become janusfaced and go silent while those who never appreciated democracy but now profess to be repentant democrats, set bad precedence for our hard earned democracy”.
Also, a  former Minister of Education and  a  chieftain of the Social Democratic Party, SDP, Prof. Tunde Adeniran, also  speaking, yesterday, said: “I expect the National Assembly to stand up to their responsibilities by upholding the rule of law. I also expect them to regard the Nigerian situation as a national emergency and treat the issues before them with dispatch.”

Facebook Comments
Loading...
Related ItemsForeignNews
← Previous Story Buhari Made A Very Big Mistake That Are Haunting His Government And It Can Not Be Change Now – Tam David-west Blows
Next Story → There Will Be Nothing Like Nigeria Within Six Months Watch And See- Chief Robert Clarke Spits Fire