Home / News / Nigeria Is Not Working Over 50 Years And The Time Has Come For Us To Accept That It Is Not Working And Will Never Work, Let Conduct Referendum To Decide Our Fat Period – Dr J .O .S Okeke Speak

Nigeria Is Not Working Over 50 Years And The Time Has Come For Us To Accept That It Is Not Working And Will Never Work, Let Conduct Referendum To Decide Our Fat Period – Dr J .O .S Okeke Speak 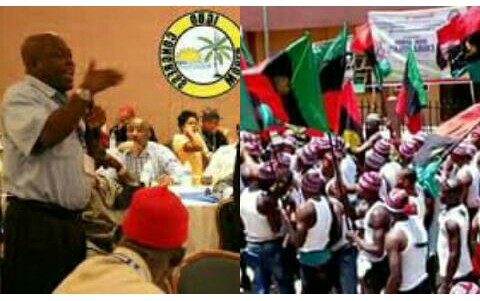 I wish, respectfully and humbly, to state that option (b) is the best for Ndiigbo for the following reasons:
1. There is no desire by any of the leadership of Nigeria, to date, to build a nation.
2. The Fulani have their agenda in Nigeria which they have pursued diligently since 1804 and are close to achieving their objective.
3. No meaningful restructuring will be achieved without an accurate census. We know that the North will not allow that.

4. All was not well with our people in the pre-civil war set up. Recall events in the Northern House of Assembly in 1963-64 when the sentiments expressed and demand made of the Saduana was how to dispossess the Igbo and deal with them.

5. There is no viable methodology by Ndigbo to force implementation of option (a) in that it involves taking the democratic route which we have little or no leverage. The international community will not be involved as this will tantamount to interference in the domestic affairs of a sovereign country.
6. As we speak there is a full slate of Igbo candidates canvassing seriously for elected office even with the discredited 1999 constitution and some of them will be willing tools in the hands of our adversaries to foil any boycott of 2019 election.
7. Nigeria will not do the right thing for the Igbo based on domestic pressure, therefore, we must solicit international pressure and help this we can get by fighting for Nationhood in keeping with UN resolution of 2007.
8. Ndigbo have all that it takes to build a viable, progressive, prosperous and peaceful nation. We have the land mass, the climate, the soil the natural resources and most importantly, the human resources as can be found in other prosperous countries. All we need is to challenge ourselves as we did during the civil war. Did anybody dream of “ogbunigwe” and other technological feats achieved in Biafra before the war started?
9. We have tried to make Nigeria work for more than 50 years and the time has come for us to accept that it is not working, has not worked and will never work. To continue to exist in Nigeria is to prevent the Igbo achieving their God-given potential. This is the best opportunity we have and we must not lose this and leave the struggle to our children and grandchildren. We must not allow the fate and the future of a race of people created by God to be in the hands of others. We will keep an open door to our Neighbors with whom we have coexisted for centuries if they wish, to join us.
10. The decision to call for a referendum so that the people can decide between the two options is highly commended.
J.O.S.Okeke

Facebook Comments
Loading...
Related ItemsNews
← Previous Story I'm the right Man for Nigerians,  I May Run For President and Change the country – Al-Mustapha, Ex-Abacha CSO Boosts
Next Story → Obama Is A Cousin To Nigeria As He Planned To Rig American Election Like Nigeria Do Rig Their Election – Trump Blasts Obama