Home / News / Agitation For Biafra Is So Annoying And Is Causing Problem, Let Them Go So That We Can Have Peace – Tanko Yakasai Blows

Agitation For Biafra Is So Annoying And Is Causing Problem, Let Them Go So That We Can Have Peace – Tanko Yakasai Blows 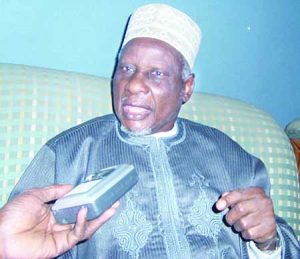 Biafra referendum evangelism is hitting hard around Biafraland and beyond.

According to Tanko Yakassai, “agitation for Biafra is so annoying. Let them go ___”
Tanko Yakasai OFR is a Nigerian politician, former Liaison Officer to President Shehu Shagari.
He is a founding member of Arewa Consultative Forum.
We have a lot to learn from Southern Sudan.
The Southern Sudan people were instigated by the West, America in particular to wage war in the name of religion against Sudan; that you are Christians, so you better fought the Muslims, which was a lie because they wanted to separate them because oil deposit was in the South.
After referendum, the North said, ok, let them go. While Northern Sudan is enjoying peace, Southern Sudan is experiencing civil war.
I was watching on the television the level of famine that the people of Southern Sudan are experiencing. If they were still under one umbrella, it would not have happened.

Let us learn from the lesson of other people. If you ask the people of Southern Sudan they would tell you they had preferred to be together with Northern Sudan.

The way God created Nigeria, I told you that although Britain created Nigeria, they did the will of God.
Whatever will happen, the kind of food and cash crops that can grow in Northern Nigeria can never be grown in Southern Nigeria because the rain will be too much for it.
Because of too much rainwater, these crops grown only in Northern Nigeria, can’t survive in Southern Nigeria.
We are complementary to one another. Apart from the education of the Yoruba and the hard work of the Igbo, we are interdependent.
Everybody is suffering, but if we want to suffer, we can continue the suffering. The Hausa people say, Mutuwar yawa kaka (If death is going to take everybody, not me alone, let it come.)
So, you can see, if Buhari says he is fit and wants to continue, I wish him goodluck.