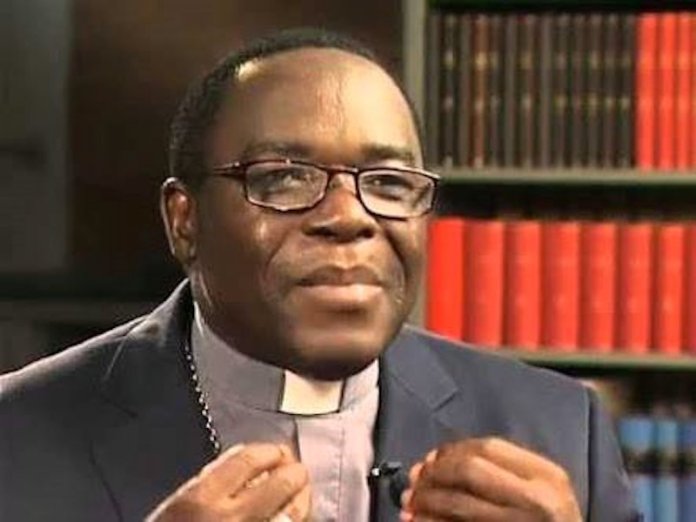 The Bishop of the Roman Catholic Diocese of Sokoto, Matthew Kukah, has alleged marginalisation of Christian students in some tertiary institutions in northern Nigeria.
Speaking at a book launch organised by PREMIUM TIMES Books on Wednesday, Mr Kukah accused northern governors of aiding the alleged injustice.
“As I’m talking here now, whether it is Bayero University, Usman Dan Fodio University, most of the universities and tertiary institutions in northern Nigeria, Christians don’t have a place to worship after over 40 years of the existence of these universities and these are the areas where the intellectuals, those who are going to govern Nigeria, this is where they are.
“Up till today, as I’m talking to you, you can’t find a single governor in northern Nigeria that will effortlessly sign a certificate of occupancy for the building of a church. Nowhere,” Mr Kukah lamented.

The cleric said the academic and security environment in the country discourage having frank discussion on insecurity.
He accused Nigerian scholars of fuelling crisis by their views and teachings.
“Northern Nigeria is literally a closed book. And our inability to understand northern Nigeria collectively as a nation accounts for most of the crisis we still face in this country.
“We have a very serious crisis in our country. A crisis that relates to the fact that those who are in academia are simply miniature gods of ethnic hegemony. We can see from reactions, Boko Haram, politics in Nigeria, 2019 and others, when you listen to academicians, what we are saying are not different from what the people in our villages feel.
“We were barely six months or so into this crisis when I published an article titled ‘Bread, not bullet.’ I was trying to make the point that we needed a much more robust engagement based on our common humanity. We needed to hear the stories leading people to this kind of life rather than just turning this into a gun battle. Suddenly, few years later, we are shamelessly pretending that weapons for fighting have not been bought or money has been squandered.”

Mr Kukah said the orientation of northern children prepares them for violence against non-Muslims.
“I live in Sokoto and I have windows of my churches broken because young children are throwing stones at the cathedral. I had one of my parishioners went blind three years ago. His house was by the roadside. Children coming from Quranic studies threw stones to his house. I’m asking the question, what are these children being thought about the other person? This is a very serious crisis in northern Nigeria.
“These kids will grow up and I can’t stop them from burning my church because they have given them, their superiors have given them impression that somehow, not being a Muslim, you belong to a different specie.”
He urged Nigerians to come together to identity themselves first as humans and not religious adherents. He gave instances to buttress his point.
“The point I’m making is that people are behaving like I cannot be a non-Muslim and study Islam. We have a crisis at our hands. A cousin of mine who is a non-Muslim just came back from Egypt. His Arabic is most likely better than that of most people in Nigeria but, in the course of his programme, he was sent out on the ground that he’s doing too much of Arabic and truly he was digging much more than the people that are teaching.

“We used to have a professor who was a priest. In fact, many call him a Muslim because everything about him is Muslim but he ran into a problem in the University of Ibadan because Muslims are now saying, ‘can you be a priest and talk to us about Islam?’
“Really, one of the problems northern Nigeria must address is the limit of intellectual curiosity. These are some of the boundaries that Raufu crosses effortlessly.

“A cousin of mine, he’s dead now, living in Kano called me one day and said his little son just brought a beautiful result but had 85 per cent in Arabic. And he said to me, why will this boy have 85 per cent in Arabic? I asked what is the problem? He said no, he got 70 per cent in CRK, why will he go and have 85 per cent in Arabic? I said Arabic is a subject. He said no, he could become a Muslim tomorrow.”
Mr Kukah praised Raufu Mustapha, the editor of the two books unveiled, for his unrelenting hope in Nigeria while alive.
“I spent a good part of my evening at Raufu’s office and I would listen to him talk about Nigeria and I always marvelled at the depth of his scholarship,” he said.
“In a very strange kind of way, this ray of hope that he had in the horizon. Things were very bad but he always believed that there was a lot of hope.”

A great History Repeated itself, IPOB Women Records in Owerri what happened in 1929 in Aba – IPOB Declares