Home / News / Go and Seek for your proper Compensation over the unlawful detention by the Nigeria police, Women can't be silenced by anti-democracy – group tells Freed IPOB women

Go and Seek for your proper Compensation over the unlawful detention by the Nigeria police, Women can't be silenced by anti-democracy – group tells Freed IPOB women 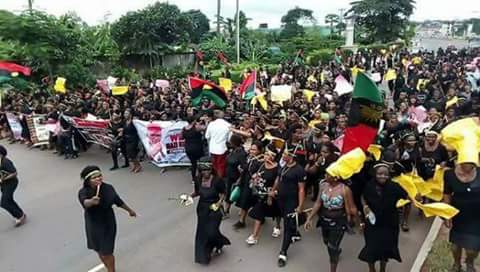 Freed IPOB Women: Women can’t be silenced by anti-democracy, says group
Women Arise for Change Initiatives, an NGO, on Saturday advised Nigerian women not to allow themselves to be silenced by anti-democratic elements in the society.
Joe Okei-Odumakin, President of the group, said Lagos that women had the right to freedom of peaceful assembly.
The activist spoke against the background of the unconditional release of the 114 women suspected to be members of proscribed Indigenous People of Biafra (IPOB) by a high court on Friday in Owerri.
The women were remanded by an Owerri Magistrate’s Court after they were arrested and arraigned by the police for demanding to know the whereabouts of IPOB leader, Nnamdi Kanu.
“My advice is that Nigerian women must not allow themselves to be silenced by any anti-democratic elements or authority. They must understand that they have a right to peaceful protest, which is a fundamental human rights and as such, no one should be allowed to deny them of it.
“Women must also realise that they can lead the society out of whatever injustice, as already demonstrated by the Owerri 114.
“This should serve as a lesson to other women to learn from,’’ Okei-Odumakin said.

The activist also urged the women to approach the courts to demand proper compensation for alleged unlawful detention.
Okei-Odumakin regretted that innocent people were incarcerated in an inhumane and illegal way for merely expressing themselves in a legitimate manner.
She urged the police and whoever was involved in the arrest and detention of the women to tender an unreserved apology.
She said: “The police must apologise for dehumanizing the peaceful protesters, illegally detaining them and parading them as treasonable felons. That must be done.’’
Okei-Odumakin expressed joy that her organization joined other pro-democracy elements in demanding for the release of the women through pressure well-coordinated by Nigerians and stakeholders in Imo.

Facebook Comments
Loading...
Related ItemsBiafraNews
← Previous Story A young Artist Ugochineyere makes a shocking revelation, says " I Was Rejected By My Own, But Adopted By Another"
Next Story → Nigeria Will die a natural death in no distant time, Watch out – Victor Attah opens up