Home / News / "IPOB is not a terrorist Organization, we support their scheduled peaceful Sit-At-Home order on 14 sept" – Ohanaeze Youths Reacts, urges Demonstration to be peaceful

"IPOB is not a terrorist Organization, we support their scheduled peaceful Sit-At-Home order on 14 sept" – Ohanaeze Youths Reacts, urges Demonstration to be peaceful 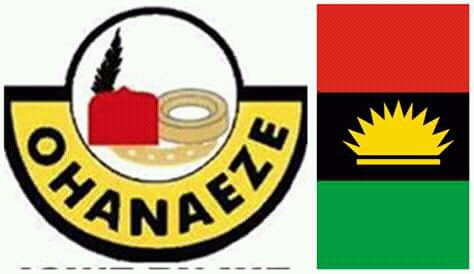 Igbo Socio-cultutal group, Ohaneze on Wednesday said it was not against IPOB’s call for a sit at home in the South East and other Igbo speaking areas in the South South.
It however called on the pro-biafran group to carry out the exercise in a peaceful manner.
Spokesman of Ohaneze, Uche Achi-Okpaga states this in a reastikn he gave to Premium Times on IPOB’S sit-at-home exercise planned by the group for September 14. IPOB in a statement said it was carrying out the exercise to protest the invasion of the country home of its Leader, Nnamdi Kanu same date last year. Since the invasion by the Army, Mr Kanu’s whereabout have remained unknown with the Millitary and the group trading blames over his whereabouts.
Mr Okpaga in his reaction said IPOB is not a terrorist organisation. “Any action of IPOB that is peaceful is welcome. Sit at home is a welcome idea. That is what we have been saying that IPOB is not a terrorist organisation, they are a peaceful organisation”, he said. “It is the Nigerian Army and Government that is deploying all these ploys to make them look violent but all their actions are always peaceful and cordial”.
Mr Achi-Okpaga warned the Millitary not to capitalize on the sit-at-home to attack IPOB supporters in the region “There is nothing wrong with asking you to sit at home. If you want to sit at home you sit at home, if you dont want to sit at home you go about your normal business”. “Ohaneze will not be against that move what we don’t want is whereby they(the army) will capitalise on that to be killing our people”, he added.
Also, the National leadership of All Nigeria Ethnic Nationalities Youth Organizations has stated that it would interface with Governors of the South East zone to forestall break down of law and order during the September 14 sit-at-home order declared by the Indigenous People of Biafra, IPOB. The group further advocated an exercise devoid of violence arguing that the action is capable of leading to loss of lives and properties within the region.
It insisted that IPOB must change its strategy and ensure people’s lives are not lost in their struggle for self-determination. In a statement issued in Abakaliki, the Deputy National Chairman, All Nigeria Ethnic Nationalities Youth Organization, Mazi Okechukwu Isiguzoro sued for peace as IPOB marks one Year Anniversary of the invasion in Nnamdi Kanu’s home in Abia State.
“Ethnic Nationalities Youth Organization will interface with South East Governors on the need to save Igbo land from any act that will bring down law and order in the face of IPOB/MASSOB struggle for self determination and Biafra agitation. It is necessary yhat such meeting will bring back the stakeholders in Biafra agitation to ensure peace in quest for self determination.
“Irrespective that any group is entitled to self-determination and freedom to observe any day as a means of expressing their anger or protest over perceived injustice and seek better ways to ensure redress through legal and constitutional channels, Ethnic Nationalities Youth Organizations caution for peaceful means devoid of violence and action capable breaking down law and order, the group said.

The group while acknowledging the injustices metted out to the zone on Sept 14 last year, the group urged security agencies to ensure that there was no confrontation with IPOB on the day of the sit-at-home exercise. “We Urge IPOB to consider the Economic loss of the people of South East and ensure that the sit at home on September 14th should not expose Igbo Youths to untimely death.
“We know that injustice recorded on September 14th will always be indelible in the minds of South Easterners but IPOB should put up measures in place to ensure re occurrence of such injustice never happen again, IPOB must change strategy and ensure people’s lives are not lost in their struggle for self-determination”
“We call on Security agents to overlook the sit at home order and ensure that South East didn’t witness any act of confrontation between them and Biafra agitators, and maintain peace during and after September 14th, 2018.”

Facebook Comments
Loading...
Related ItemsBiafraNdigboNews
← Previous Story CONFUSION: I must go for Presidency in 2023 to represent South-West – Tinubu Blows Hot
Next Story → 'I registered for NYSC For a reason' – Davido reveals