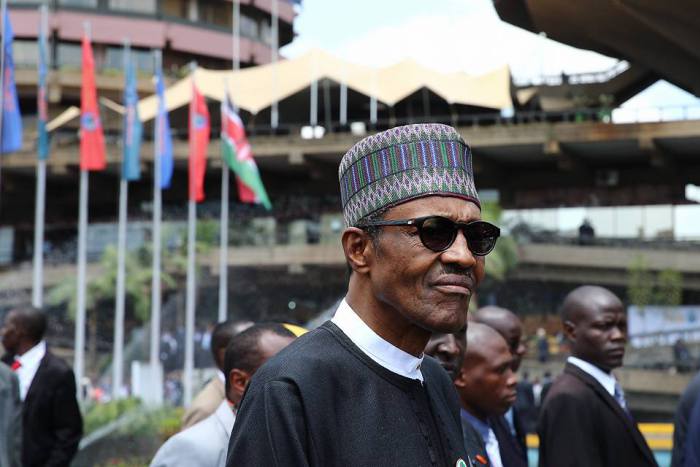 Nigeria’s President Muhammadu Buhari, pictured April 2018, and his administration have drawn criticism from Amnesty International for using “enforced disappearance as a longstanding tactic to silence critics”
Amnesty International on Thursday accused Nigeria’s government of carrying out unlawful arrests and practising “enforced disappearance” — detention without trial — to suppress dissent.
“The Nigerian government has used enforced disappearance as a longstanding tactic to silence critics and instil fear in civilian populations,” the rights watchdog said.
It said some detainees had been held incommunicado for up to nine years or more, without access to family or lawyers, and others have continued to languish in prisons despite court orders for their release.
Amnesty cited the case of journalist Abiri Jones, who it said had been detained by the Directorate of Secret Services (DSS) for two years without access to family or lawyers.
“At the beginning, the government denied detaining him, only to later release him following pressure from civil society organizations. It is unacceptable that many families are going through the same turmoil Abiri’s family went through,” said Osai Ojigho, head of Amnesty’s Nigeria section.

The rights group said people suspected of links to the Boko Haram jihadist group, Niger delta oil rebels and pro-Biafran activists had suffered a similar fate.
Amnesty asked the government to account for some 600 Shiite members of a pro-Iranian group called the Islamic Movement of Nigeria (IMN), allegedly held since deadly clashes with the military in December 2015.
“We call on the Nigerian government, as a matter of urgency, to end unlawful arrests and incommunicado detentions,” Ojigho said.
“Enforced disappearance is an instrument of intimidation that grossly violates human rights. It is unacceptable and must stop.”
On Tuesday, President Muhammadu Buhari drew the flak of opposition, civil society groups and lawyers for remarks on the rule of law.
Buhari, a former military dictator in the 1980s but who was elected in 2015 and is seeking re-election in February, said the “rule of law must be subject to the supremacy of the nation’s security and national interest.”

Police Raide The House Of Chief Edwin Clark In Abuja