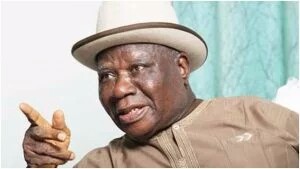 Elder statesman, Edwin Clark, says he has forgiven those who invaded his house over alleged stockpiling of firearms.
Clark said he decided to forgive them in the interest of peace and the fact that the Inspector General of Police, Ibrahim Idris had apologised.
He made the statement when Sen. Shehu Sani (APC- Kaduna) visited him in Abuja, NAN reports.
“I have forgotten all that since the Inspector General has apologised to me through a very powerful delegation; I have forgiven them in the interest of Nigeria.
“If I do not, there are people who are very willing to cause trouble and I do not want that to be done in my name.
“I have also appealed to my youths, my children at home who gathered at Yenagoa in Bayelsa, who were very upset to be peaceful.

“coming to search my house was not a problem, but if it was not properly planned, or with an intention, just to embarrass me and the government then there is a concern.
“Whatever you do, if it fails, it affects the government of President Buhari, if it succeeds perhaps it will go on,” he said.
Clark further said it would be unfair and unreasonable to think that a 91-year old man, who had been fighting for peace in the country and had directed youths to lay down arms, to stockpile arms.
“So today at 91, I should be gathering arms in my house,” he added.
The elder statesman said he had written to the President, requesting a full investigation into the incident and those behind it, and not to make those who searched his house the scapegoat.