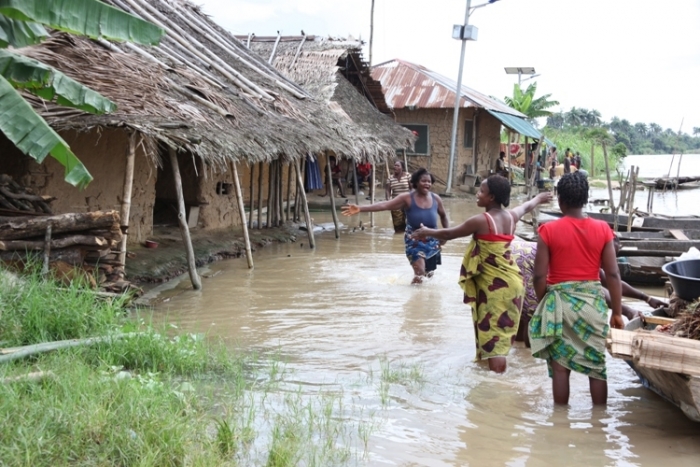 Flood submerged no less than 1,000 residential houses in Etsako Central Local Government Area of Edo following Monday’s heavy down pour in the area.
Newsmen report that hectares of farmland with cash crops and property worth millions of naira were also destroyed.
The affected produce included cassava, yam, maize, groundnuts, plantain, among others.
The communities affected are: Anegbette, Udaba, Osomegbe, Ugochi, Ofukpo, Agbaburu and Ifeko.
Some of the victims, who spoke with newsmen, blamed the flood on the surge of River Niger.

The Village Head of Udaba, Chief David Inetape, expressed shock over the incident, saying that the entire communities were now flooded.
“With heavy rainfall, the situation is now having negative effects in our communities.
“We are appealing to the Federal and state governments for help,’’ Inetape said.
One of the victims, Mr Benjamin Eyiekioya, told newsmen that he lost his entire property to the flood.
“The flood has wreaked havoc on our buildings; as you can see, our houses have been submerged by the flood.
“We are appealing to the relevant authorities to come to our aid,’’ Eyiekioya said.

Another victim, Mrs Rose Akinabor, said that she lost all her farm produce to the flood.
“I invested a lot of my time and finances in cultivating my farm and I am now worried that just at about harvest time, most of my crops have been washed away by the flood,’’ she said.
Mr Aliu Afomede, said he lost millions of naira worth of farm produce to the flood.
“I invested millions of naira on this farm, this year.
“As you can see, this farmland which I rely on for my daily bread is now washed away by the flood,’’ he said.
The Vice Chairman of the Local Government, Mr Ambrose Akhigbe, said the council had commenced the clean-up of the Federal Government’s resettlement camp in Oghomere with the aim of relocating the flood victims to the area.

“The council is doing all it can to relocate the victims after proper cleaning of the buildings and fumigation are completed.
“We are going to the affected communities with speed boats to evacuate them and we have reached out to relevant agencies to provide relief materials to the camp for the affected victims.
“As you can see, the borehole is set and the rooms have been tidied up to ensure that it is conducive.
“We shall also bring a very big generating set to ensure regular power supply in the camp so that the displaced persons can feel at home,’’ he said.

POLITICAL WAR: I won't Step down for Atiku, he is an Old Man – Lamido insists