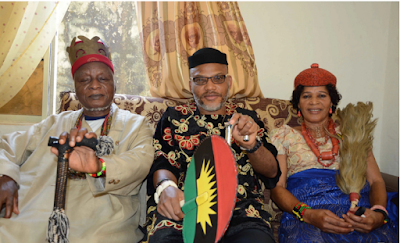 UMUAHIA—THE family of Mazi Nnamdi Kanu, the leader of the Indigenous People  of Biafra, IPOB, has condemned the Embassy of Switzerland in Abuja for allegedly denying travelling visa to members of the family invited by the United Nations to the 116th United Nations Human Rights Working Group on Enforced and Involuntary Disappearances.
According to Prince Emmanuel Kanu, Nnamdi Kanu’s younger brother, the family members were invited by UN as key witnesses of the alleged mass murder committed by the Nigerian security operatives when the family compound was invaded on September 14, 2017, during the Operation Python Dance ll conducted by the Nigerian Army.
Nnamdi Kanu missing ?
Emmanuel Kanu said apart from the family members, “key IPOB members who witnessed the genocide at Afaraukwu were also denied visas.”

He accused the Embassy of “conspiracy, collusion and unholy dealings with Abuja to frustrate the family and help the Nigerian state escape punishment.”
Kanu further disclosed that some Amazonians fleeing persecutions in the Camerouns were equally denied visa by the Swiss Embassy, alleging that it was a clear indication that the Embassy was colluding with “oppressive administrations to suppress freedom fighters.”
He lamented what he called bad faith of the Swiss Embassy in constituting itself to an impediment to the family’s bid to get justice over the unprovoked invasion of the family house and the disappearance of their beloved ones including his parents, Eze Israel Kanu, the traditional ruler of Afaraukwu community and his wife, Lolo Sally Kanu.
“Some of our family members who were invited by the United Nations could not understand why they should be denied visas. Some Amazonians who fled Cameroun to Nigeria who were also invited to the United Nations by this same working group were also denied visas.

“The reason for the invitation is to state categorically as eye witnesses, to the United Nations, what happened on the 14th of September 2017, when the Nigerian Army illegally invaded the home of Mazi Nnamdi Kanu, the IPOB leader.
“For the fact that you house the world body does not give you the right to deny victims and key eyewitnesses of torture and genocide visas even when the same world body invited them,” Kanu lamented.
He therefore appealed to the UN as well as the United States of America and other human rights promoting nations to prevail on the Swiss Government to change their decision and issue visas to the invitees so that the UN could get first hand information from them.
12 Igbo groups support IPOB’s sit-at-home order
Meanwhile, 12 Igbo groups have endorsed the September 14, 2018, sit- at- home order in the old eastern region by IPOB.

The groups met in Enugu yesterday, insisting that the order must be obeyed to the letter.
The meeting which held at the residence of Chief Maria Okwor, who was also the convener, was attended by traditional rulers, traders’ associations, youth groups and student organisations among others.
Addressing reporters shortly after the meeting, Okwor lamented what she described as the humiliation meted out to Igbo women who were locked up in Owerri for expressing their opinions in a democracy.
Okwor complained bitterly over the continuous ill treatment of Ndigbo as a conquered people and urged the people, “to sit at home on Friday, September 14, 2018 to express our frustrations with Nigeria.”
She insisted that Nigeria must be returned in accordance with the 1963 constitution for the country to survive.
Secretary of ECA and founder of Igbo Youth Movement, IYM, Evangelist Elliot Ugochukwu-Uko who also spoke on the occasion, described the invasion of Igboland with military hardware every September as provocative and insulting.

His words: “Every September, military equipment is moved menacingly into Igbo land just to remind us that we are a conquered people.
“Next, they will say some students threw stones at them and mayhem will be unleashed on our people. There’s no war going on here, there are no killings going on here. Igbo land is peaceful,why the constant invasion?
“The soldiers should be drafted to the Sambisa Forest in Borno State and other local governments where killings are going on everyday.
“Bringing the so-called Operation Python Dance 3 to our peaceful region now is only designed to deliberately provoke a confrontation that will lead to further loss of lives as they did last year.
“The meeting also agreed to organise a street march in October to drive home their demand for a new constitution,asserting that the rigid unitary constitution designed by the military is an evil document. “
Police, Army, others team up against IPOB
Ahead of the planned sit-at-home on Friday, heads of various security agencies in Imo State yesterday said they had adequately garnered their officers to deal with the  September 14 sit-at-home declaration by the Indigenous People of Biafra, IPOB.
The decision was taken in a joint security meeting at the Imo Police headquarters, in Owerri, which lasted for about an hour.

Those at the meeting included the Imo State Commissioner of Police, Dazuki Galadanchi; 34 Artillary Brigade Commander, Obinze; and  H. I Bature, Director of Department of State Services, DSS.
Others were Controller Nigeria Customs; Federal Road Safety Corps, FRSC; Nigeria Security and Civil Defense Corps, NSCDC; Nigeria Air Force; Nigeria Navy; Nigeria Immigration Service; and Nigeria Prisons Service, NPS, among others.
Galadanchi told newsmen that the essence of the meeting was to ensure that “members of IPOB do not use the sit-at-home order to cause trouble.
“The heads of all the security in Imo state are working together. We are here to tell the world that we are saying no to the proposed sit-at-home  order on September 14, by IPOB,” he said.