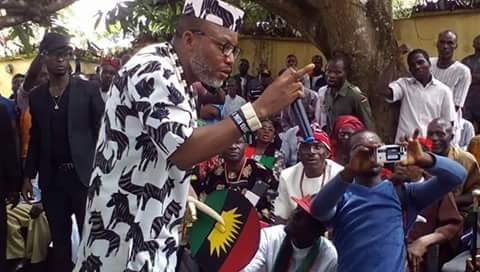 WHAT IS LIFE WITHOUT THE FREEDOM OF BIAFRA BOROKIRI IPOB BLOWS HOT (GIVE US REFERENDUM DATE)
The quest for the restoration of the sovereign state of Biafra has taken another dimension as Rivers State Media tour another community in Rivers State to take a glance at our people view in the struggle for freedom. The land of the rising sun, the epicentre of the earth, a blessed land is inevitable and unstoppable. IPOB Bororiki in Igweocha region has made their stand, is Biafra Referendum or nothing.
The Indigenous People Of Biafra (IPOB) led by Onyendu Mazi Nnamdi Kanu; is doing marvellously well in enlightening our Riverine brothers about their brethren in Alaigbo. Our unity is paramount to us, days of ignorance is over. We have known the truth about the hate speeches propagated by Yoruba Gutter Media against our Igbo brothers. Biafra has risen to height that no mortal man can destroy her up spring. IPOB must continue propagating this gospel of truth. Most specially, in uniting our Coastal brethren (Upland) and Riverine brethren to this noble quest to freedom. IPOB Borokiri will leave no stone unturned until our freedom is achieved.
We are using this medium to call on all Borokiri Indigenes, both those in Nigeria and diaspora to join this moving train to secure the futures of our generation and unborn generation. The Nigerian state and her foreign collaborators don’t give a toast about our plight. Let’s unite in one voice to liberate our people from this suffering we are into. May Chukwu Okike bless the leadership of IPOB worldwide. May no harm before us, we shall live to achieve our dreams. Biafra referendum is unstoppable and inevitable.

KNOW THY HISTORY
There was a Biafra before 1967 which lost its sovereignty to colonial powers. “Early modern maps of Africa from the 15th-19th centuries, drawn by European cartographers from accounts written by explorers and travellers, reveal that the original word used by the European travellers was not Biafra but Biafara, Biafar and sometimes also Biafares.” Now let me correct one impression about the meaning of Biafra as some believed it is a name given by Portuguese explorers. Biafara people are already known and addressed as Biafara people before they came in contact with the first European merchants.
The word Biafra has its generics from “Ephraim” as pointed out by Martin Simon Ukegbe (a religious activist who suggested that the new Republic of Biafra of 1967 be called the Christian Democratic Republic of B”Ephrayim) the B there signifies the bay or bight so the word Biafara or Biafar has its root from B”Ephraim but the Europeans at that time called it Biafar-Biafara or Biafares. Researchers hold the view that the region is inhabited by descendants of Ephraim.
Mitchell map of 1839 stated that the important estuaries from where the rivers flow into the ocean is called Ephraim town which is located 60 miles from River Nun which is in the south-south Nigeria today. The river is named after Nun the father of Joshua of the tribe of Ephraim. Biblical meaning of the name “EPHRAIM” is “God has made me fruitful in the land of my affliction”.
The question now is who are the most afflicted, deprived and mostly killed in the contraption called Nigeria “Biafra people” who are the most fruitful, blessed by nature and skills within the contraption called Nigeria “Biafra people” before 1967-1970 genocide war against Biafran people they have been killed in their thousands by the Northerners and Westerners 1966, during the war, all the public facilities where completely destroyed, that includes Schools, Hospitals, Markets, Power plants, Churches, Post offices, Biafra land (south-east Nigeria and some part of South-south) where desolate with no life sustaining amenities, after the war in1970, Awolowo the finance minister gave £20 to every Biafra no matter the amount you have in your bank account, and declared all their properties outside Igbo land abandoned property, including Port Harcourt where Ikwerre Igbos denied their Igbo identity with the intention of annihilating and breaking the spirit of Igbo to make them perpetual beggars and people of no hope for the future. The rest are history today which you can confirm for yourself.
Today an average Igbo man that has his Igbo identity are far much better than every other Nigeria from all perspective, you can disprove that if you think otherwise. Biafran Ethnic Nationalities: Ibos (Igbo speaking Biafrans), Ijaws (speaking Kalabari, Edoid, Izon language etc) others includes: Ibibio-Efiks and Ogojas, and this Great Nation has been coexisting thousands of years ago as Biafra people many centuries before losing her sovereignty to colonial powers before being balkanized into various countries like Guanine Bissau, Cameroon, etc, the Archaeological evidence and African Ancient map stands as a proof that Biafra people are a nation and are Indigenous people Origin and meaning of Igbo/Ibo as a language and people: (this part is written in Igbo Biafra perspective and all other Biafra Ethnic Nations shared same experience and linkage with their Igbo  brethren.

The name BIAFRA, is a nomenclature the people of the old Eastern region in the contraption called Nigeria, was identified with, well over decades of years before the advent of Fredrick Lugard and his fellow colonialists that conceptualized the amalgamation theory of Nigeria.
The original, untainted map of Africa, has Biafra conspicuously contained with no description of any country known as Nigeria. This further portrays the originality and superiority of Biafra as a nation over and above Nigeria even as clearly inscribed on the floor of the British Broadcasting Corporation (BBC) in London. There is a display of a list of nations including Biafra that had existed dating back to the 17th, 18th and down to early 19th centuries. Up till date, those historical inscriptions on the floor of the BBC are yet evidenced without Nigeria included.
The nomenclature Biafra, was given to a class of the Israelites who historically journeyed on their way from Egypt to Canaan the promised land. They conspired with Aaron to build a golden calf which served as their god (idol) to abridge the vacuum created by the absence of Moses whose anticipated return from Mount Sinai got delayed. According to biblical accounts, he was there for forty days and forty nights to obtain the tablets of the 10 commandments of the Almighty God, for the children of Israel during their encampment in the wilderness. There subsequently journeyed from the wilderness to Ethiopia and then down to Agulu, the present day Agulu-Eri in Anambra State, Biafraland.

This set of Israeli immigrants into this part of the world, were christened Biafrans because of their behavioural instincts patterned after God. The name Biafra means ‘Bia furu ndi neme ka Chineke’ (Come and see those that behave like God). From time immemorial, Biafra has been a nation peopled by godly class of human species just like their Creator (Chukwu Okike-Abiama). They are descendants of Jacob, God’s chosen among the nations of the earth, directly from the tribe of Eri.
The sacredness attached to the name Biafra, is such that darkness cannot comprehend and at the mention of the name, within the spiritual and physical spheres, the devil and all his cohorts, stutter, scramble, tremble and flee to avert the conflagration, particularly within their camps in the contraption called Nigeria.
Within the Nigerian electronic media platforms, call-in to any of their audience participatory programs where Biafra name is mentioned, cause waves of abrupt/ unsettling reactions. The brown-envelope and compromised journalists will just get the Biafran calls truncated as such gravely neutralize their evil activities.
The Biafran nomenclature scares the devil and his agents. It is a name whose bearers should be glad they are associated with anywhere because of the enormous blessings embedded therein, quite unlike Nigeria the citizens are ashamed getting identified both within and without, due to the evils associated with that name.

Millions of people around the world today, want to identify with Biafrans ostensibly due to the diverse rich endowments these specially blessed children of God are associated with. Biafrans, be proud of your identity and firmly stand in the struggle for your total emancipation from this slavish contraption of the British called Nigeria and all that she represents.
NO BIAFRA NO PEACE.
Written by:
Mazi Dimkpa Ikenna Ikenga Amadioha-Gbo
For: Rivers State Media (Igweocha Province)

Buhari Has Passed A Vote Of No Confidence In One Nigeria With The Appointment Of A New DSS DG – E.K Clark Speaks