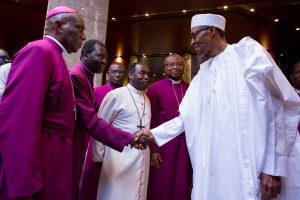 Abeokuta – The Bishop of Oturkpo Anglican Diocese, Reverend David Bello yesterday said any politician who becomes billionaire while in office is a thief.
Eection
The Bishop said leadership is all about service to the people, submitting that politicians who seek power tend be intoxicated by power.
He spoke while giving a sermon at a special church service at Saint Peters Cathedral, Ake, Abeokuta as part of activities marking 75th birthday of Alake of Egbaland, Oba Adedotun Gbadebo.
The Clergyman challenged public office holders in Nigeria to face the task of service which they were elected for rather corruptly enriching themselves in office.
Bello said “It is not power. People say they want to contest for power. It’s not power. Whether you are the President, Governor, a Senator or member of the House of Representatives, you’re called to serve the people. And when you have served, that’s when you deserve to be called honourable.
“There are many things we do in this country that is very nauseating.
“We have adopted American constitution and you’re calling some people Distinguished Senator, there is nothing that is distinguished.
“We still called some people Right Honourable Speaker, that’s for parliament in Britain. Speaker is speaker. Some of these things are ignorance and the people laugh at us.
“The position is not a contest for power and that’s where we get it wrong.

“Power is an intoxicant like a wrong wine. If you are contesting for power you will become drunk with power. And that’s why an English philosopher says power tends to corrupt and and absolute power corrupts absolutely.

“If you go into office to serve and you become a billionaire, you’re a thief. You’re not to go there and become a billionaire. In fact you’re expected to lose something and because you have lost something, people will respect you and honour you. So, we should try to see things for what they are.
“There are some people who are getting to power today, but we don’t remember them. Their memory is not blessed. In fact we curse them because they didn’t serve the people.”
The Anglican Bishop described Alake’s 75th birthday as “celebration of life and service.”
Governor Ibikunle Amosun who was one of prominent personalities in the church agreed with the clergyman later in his address that leadership “is all about service to the people.”
Amosun equally eulogised the monarch, saying his reign has brought peace and progress to Egbaland.
Dignitaries at the church service include, Former governor of Ogun state, Olusegun Osoba, Alaafin of Oyo, Oba Lamidi Adeyemi, the Olu and Paramount ruler of Ilaro, Oba Kehinde Olugbenle, Deputy Governor of the state, Yetunde Onanuga.