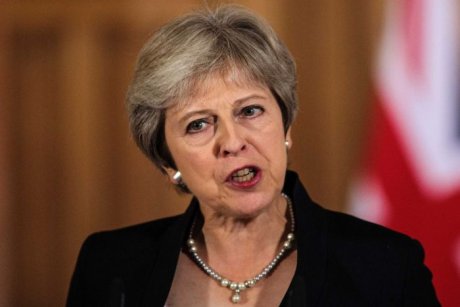 By Greg Heffer, political reporter
Theresa May has demanded “respect” from the EU after the bloc’s leaders rejected her Brexit strategy – prompting claims from Brussels she is being “uncompromising”.
Amid the fallout from an acrimonious EU summit in Salzburg, Austria, the prime minister used a surprise statement in Downing Street to issue an ultimatum to the bloc to accept her Chequers plan or come up with counterproposals.
She declared the UK will continue preparations for a “no-deal” Brexit, amid what she recognised as an “impasse” over “two big problems” in negotiations.
The prime minister’s address on Friday came 24 hours after the EU firmly stated her Chequers proposal for the future UK-EU relationship “will not work” at a summit in Salzburg, Austria.
The EU’s stance immediately ramped up pressure on Mrs May to abandon her Chequers plan, which is also unpopular with Conservative Brexiteers, and renewed fears of the UK leaving the EU in March next year without an agreement.
 
Image:European Council president Donald Tusk sought to smooth over the row
Responding to Mrs May’s stern words on her return to the UK, European Council president Donald Tusk sought to smooth over the row by describing how EU leaders, “out of respect for the efforts” of Mrs May, had agreed to “treat the Chequers plan as a step in the right direction”.

However, Mr Tusk repeated the bloc’s hostility to the UK’s proposals on the Irish border issue and the future UK-EU trade relationship.
He also claimed Mrs May’s position at the Salzburg gathering was “surprisingly tough and, in fact, uncompromising”.
Yet, he added: “While understanding the logic of the negotiations, I remain convinced that a compromise, good for all, is still possible.
“I say these words as a close friend of the UK and a true admirer of PM May.”
The prime minister will now face demands to offer an alternative to her Chequers proposal from her top ministers during a cabinet meeting on Monday, according to the Daily Telegraph.
 
Image:Theresa May made an unscheduled statement on Brexit negotiations in Downing Street
In her Downing Street address earlier, Mrs May had told EU leaders: “Throughout this process, I have treated the EU with nothing but respect.
“The UK expects the same. A good relationship at the end of this process depends on it.
“At this late stage in the negotiations, it is not acceptable to simply reject the other side’s proposals without a detailed explanation and counter proposals.
“So we now need to hear from the EU what the real issues are and what their alternative is so that we can discuss them. Until we do, we cannot make progress.”
The prime minister’s address came 24 hours after the EU firmly declared her Chequers proposal for the future UK-EU relationship “will not work” at a summit in Salzburg, Austria.

The EU’s stance immediately ramped up pressure on Mrs May to abandon her Chequers plan, which is also unpopular with Conservative Brexiteers, and renewed fears of the UK leaving the EU in March next year without an agreement.
But, speaking in Downing Street on Friday, the prime minister stuck to her proposals as a “third option” between a Norway-style relationship with the EU and a “basic trade deal”.
Mrs May claimed the former option would “make a mockery” of the Brexit vote, as it would keep the UK as a rule-taker from Brussels, along with continued “uncontrolled immigration from the EU” and a bar to signing new trade deals.
The latter option of a basic trade deal would leave Northern Ireland “permanently separated economically from the rest of the UK by a border down the Irish Sea”, the prime minister added.
Repeating her belief “no deal is better than a bad deal”, Mrs May warned: “It is something I will never agree to – indeed, in my judgement it is something no British prime minister would ever agree to.
“If the EU believe I will, they are making a fundamental mistake.”
 0:22
Video:Brexit: Chequers proposal explained
Confessing to the perilous state of negotiations after the EU rejected her Chequers plan, Mrs May said: “Yesterday [European Council president] Donald Tusk said our proposals would undermine the single market.
“He didn’t explain how in any detail or make any counterproposal. So we are at an impasse.”
Sponsored link

 How To Play The American Lotteries Online?www.24lottos.com
Pound sterling immediately slumped in the wake of the prime minister’s words on Friday.
Mrs May also repeated her opposition to the EU’s proposal for a backstop solution to avoiding a hard border on the island of Ireland, should the future EU-UK relationship not avert such a scenario.
Brussels has suggested Northern Ireland effectively remain inside the EU’s customs union in its backstop plan, but the prime minister declared this as “unacceptable”, adding: “We will never agree to it. It would mean breaking up our country.”
She confirmed the UK government will be bringing forward an “alternative that preserves the integrity of the UK”.
This will include a commitment that “no new regulatory barriers should be created between Northern Ireland and the rest of the UK” unless agreed to by Northern Ireland’s devolved executive and parliament, Mrs May added.
 0:25
Video:Raab: ‘Salzburg was an ambush’
The prime minister also used the statement to make an unequivocal offer to EU nationals living in the UK they will have their rights protected whatever the final outcome of Brexit talks.

She said: “There are over three million EU citizens living in the UK who will be understandably worried about what the outcome of yesterday’s summit means for their future.
“I want to be clear with you that even in the event of no deal your rights will be protected. You are our friends, our neighbours, our colleagues. We want you to stay.”
A Downing Street source told Sky News: “It is a unilateral guarantee of citizens’ rights, effectively – so that people can live and work broadly as they do now, even in the event of no deal.”
The prime minister added the government will do “everything in our power to prevent a return to a hard border” on the island of Ireland in the event of a no-deal Brexit.
 7:30
Video:In Full: May’s Brexit statement in Downing Street
In addition, Mrs May dismissed talk of a second EU referendum, which some EU leaders had spoken in hope of during the Salzburg summit.
She added: “The referendum was the largest democratic exercise this country has ever undergone. To deny its legitimacy or frustrate its result threatens public trust in our democracy.
“That is why for over two years I have worked day and night to deliver a deal that sees the UK leave the EU.

“I have worked to bring people with me even when that has not always seemed possible.
“No one wants a good deal more than me. But the EU should be clear: I will not overturn the result of the referendum. Nor will I break up my country.”
Mrs May finished her statement by telling the EU that she and her government “stand ready” for “serious engagement on resolving the two big problems in the negotiations”.
Her address came little more than a week before what promises to be a fractious Conservative conference, amid deep splits within the party over Brexit.
 1:01
Video:PM has ‘boxed herself into corner’ on Brexit
Responding to the prime minister’s statement, Labour leader Jeremy Corbyn said: “Theresa May’s Brexit negotiating strategy has been a disaster. The Tories have spent more time arguing among themselves than negotiating with the EU.

“From day one, the Prime Minister has looked incapable of delivering a good Brexit deal for Britain.
“The political games from both the EU and our government need to end because no-deal is not an option.”
Lead Tory Brexiteer Jacob Rees-Mogg repeated his demand for the prime minister to ditch her Chequers plan but praised Mrs May’s “steely resolve”.
He said: “Salzburg was a failure even though European leaders had been briefed about Chequers before it was agreed by the Cabinet.
“It indicates that the EU is not acting in good faith. This makes the prime minister’s task harder and she is right to remind them that no deal is better than a bad deal.”
Source: New.sky.com

"I must make Sure Nigeria Remains One, It is a task that must be accomplished " – Obama Vows, Declares War Against Biafrans

"We're Committing Suicide because we don't have what it takes to confront Boko Haram terrorist, we use our guns on our fellow Soldiers" – Nigeria Soldiers Shed tears as two soldiers commits Suicide again