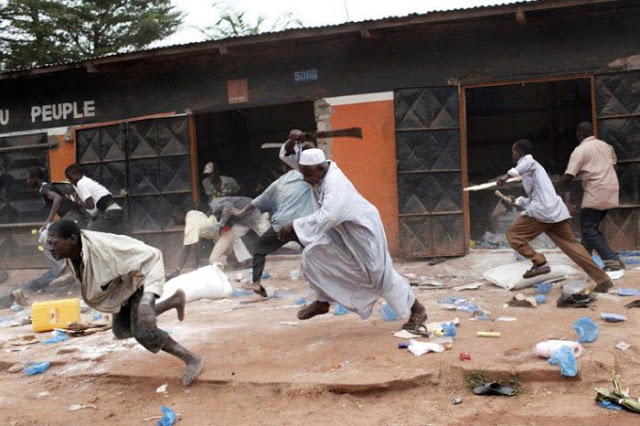 09/25/2018 – 2 Christian boys were murdered by Fulani Islamists last week in Plateau State in Nigeria, with the Islamic persecution of Christians having claimed over 250 lives in two months.
International Christian Concern reported that the bodies of Ntyang Pam Danjuma and Mesheck Dalyop Kang’ageda, aged 9 and 10 respectively, were found maimed by bullets and slashed by machetes. They have been missing since Sept. 14 while caring for a herd of cows, though a third child that was with them was able to escape.

Church leaders in Nigeria have said that Christians are experiencing “pure genocide” as 6,000 people, mostly women and children, have been murdered by Fulani radicals since January.What’s happening to Christians in Nigeria is one of the most appalling human rights abuses happening in the world right now but the Media ignores to avoid damaging Islam’s image.

The Fulani herdsmen, who are mostly Muslims, are committing genocide against Christians and non-Muslims in Nigeria.
The Islamic persecution of Christians throughout the Middle East, Asia and Africa has become genocide.
Why doesn’t the world seem to care when Christians die?
Why is it that When Christians are murdered and persecuted en masse, no one seems to care — not even other Christians?
Where are all the human rights organizations of the UN? Where are all human rights organizations in the West?
Please pray for the Christian minorities in the Muslim world.

Liberals and leftists in the West use the made up term “Islamophobia” to portray anyone who criticizes Islam as a racist.v Terrorists all over the world carry out terror attacks “in the name of Allah”. v They justify their violence by quoting verses from the Quran.v Islamophobia is a made up word created specifically to silence debate. v Liberals and leftists ignore the fact that it is an ideology that has nothing to do with race.vv Islamophobia is a neologism created to silence any possible debate about the problems Islamic extremism has got with modernity, with the intention of using the collective post-colonial “guilt” to exempt a particular set of beliefs from scrutiny, analysis and criticism.It’s a buzzword used in an attempt to silence anyone, whenever had legit questions or criticisms about the religion.
It is not a race. It’s a religion.
There is an attempt in the West to impose a sharia-blasphemy law to criminalize criticism of Islam.

It started when Saudi Arabia and Muslim countries tried to pass a UN resolution to force Western states to criminalize criticism of Islam.
The Parliament in Canada passed “Motion-103” to condemn the so-called “Islamophobia (Fear of Islam)” in a preparation for a blasphemy laIslam Canada.
If you think Sharia blasphemy law has no place in the West, share this post!
-Freespeechtimes.com

U.S. will only give foreign aid to our “friends,” Trump says