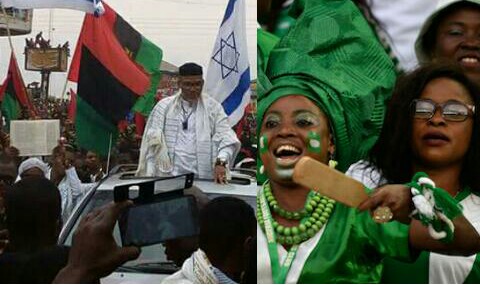 Look carefully, there is a new thing happening on planet earth. Look behind and observe how civilizations rose and were hewn down. There is always a paradigm shift.
In the days of David and Solomon, the people of Israel held sway, they were the super powers. God or man, history spoke of their resilience and conquest till Egypt, Babylon and then Rome. The earth has been like that, the rise and fall of empires, powers and kingdoms.

Egypt, Morocco, Libya and Algeria are all north African countries who share a common boundary with Europe. During many conquests, like that of Alexander the Great, most of these countries were invaded by Europeans. The city of Alexandria in Egypt was built by Alexander the Great, a young Greek warlord. These conquests brought forth many Europeans in the northern part of the continent. Please note that the whole of Egypt was formally blacks but wars and civilization took over.
The Soviet Union was massive with communism before her eventual breakup. Africa is not free or independent. The African countries you see are as they are carved are the makings or contraptions of the Europeans. They are the contraptions of the white man.

It will surprise most people to know that African countries still pay royalties to most European countries. Example, apart from Chevron of the US, Shell of the British, Elf of Italy and Agip of France exploiting oil in Biafra, Nigeria as a zoo still pay some money to Britain, thanking her for being a slave master and thanking her for all her exploitations.
Coming down to the zoo called Nigeria, the power and arrangement have been designed for the Fulani, not the Hausa o, but the Fulani (foreigners). Out of a population of 200 million aboriginal Nigerians, the Fulani people who rule over us are a mere 9million persons. How do they achieve this? Answer, RELIGION, which religion? ISLAM? Once you become a Muslim, your loyalty and allegiance is to the Fulani Sokoto caliphate and your emir. You become a Fulani slave in Nigeria assiduously bowing to the East five times daily.

Religion is a big tool of power and control. All religions were man-made and their aim is political and financial control. I will write about this in due course.
The only people in the zoo who deserve to tell themselves “happy independence” are all the Fulani and the politicians. Indeed, they have made it in life. Nigeria, most especially Biafra where the oil seats is at their beck and call. They are enjoying the spoils of war. Our stupid politicians who should know all these, join people who have never seen the location of their own oil well to dance, dine and wine on our heads.
As other regions have accepted their slave status, we have not and can never. They have given up using God’s time as excuse for docility, cowardice and laziness. Deep fear has made them cook up theories why we should accept the slave status. Talk now they will say “God dey”, “It is well”, “na only God fit help us” all these are phrases of docility, cowardice and the defeated mind.

On October 1st, as you adorn the green white green, you invariably endorse yourself as a willing slave of the Fulani and Britain. You think to be a slave is to have manacles on the feet and wrists? You can have an estate with many vintage and expensive cars, but you are still a chronic slave. Being a slave is immaterial, it is about power and control.
People are truly ignorant. People in Africa neither read nor research. When I see them wishing themselves happy independence, all I see are chronic slaves being proud of being in slavery.

I am not independent till I become dependent on Biafra.
#FreeBiafra
#FreeNnamdiKanu
#NoToNigeria
#YesToBiafra
Written by:
Mazi Alex Nwagbo
(TBRV WRITER)
For: The Biafra Restoration Voice – TBRV

I AM THE BEST PRESIDENT IN AFRICA, NIGERIA – BUHARI OFFFICIALLY DECLARES