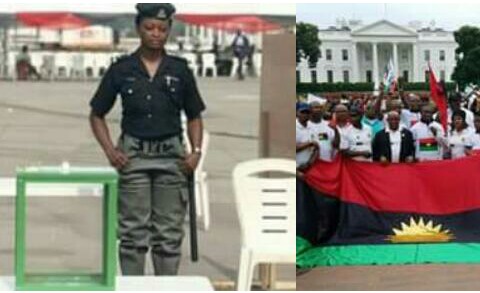 The Indigenous People of Biafra, IPOB has called for the boycott of elections in Nigeria saying that the electoral process has become a sham.
The group said that with the scenario that played out in the just concluded Osun State governorship election, It has become clearer to all and sundry in Biafra and in Nigeria, why the leader of IPOB, Mazi Nnamdi Kanu, clamoured and ordered for the boycott of every election in Nigeria particularly in Biafraland.
A statement by IPOB’s media and publicity secretary, Comrade Emma Powerful said, “Our leader in his prophesies many years ago and immediately before the Ohaneze & South East governors’ inspired military invasion of his compound, saw and predicted the shambles electoral processes has become in Nigeria.
“The rigged governorship elections in Edo, Anambra, Ekiti and now Osun State were events that confirmed Kanu’s prophesy that elections in Nigeria can never ever be credible as long as Nigeria remains one.
“Our leader warned us against the irrational and misplaced trust in the power of the PVC and assumed impartiality of Independent National Electoral Commission (INEC) headed by Buhari’s nephew.

“What Osun State debacle has succeeded in exposing is that Nigeria is irredeemably corrupt and only a revolution led by the masses, like that championed by IPOB, can enthrone good governance and order starting with the partitioning of Nigeria into independent entities.”
IPOB said that those who previously doubted the efficacy of the approach adopted by Nnamdi Kanu and the modus operandi of IPOB can now read the handwriting on the wall.
The group urged such persons or group to swallow their pride, abandon their shame and join the nearest IPOB family meeting, regardless of their ethnicity.
The statement added, “Nnamdi Kanu has demonstrated that his prescription for the ills afflicting Nigeria is the best way forward. The only approach that will guarantee good governance, free and fair elections, employment, natural justice, economic growth and rule of law, is the IPOB way.

“Recent history has proven that Nnamdi Kanu is the  only person that has a better understanding of the dynamics of governance in Nigeria and it’s damaging effect on the psyche of poor masses.
“He is the only person who is prepared to do whatever it takes to set the people free from Fulani mediocrity and bandage.
“Those that misread his intentions and the ones that chose to deliberately misunderstand him on the issue of Anambra governorship election boycott are now openly acknowledging that he was right all along.”
IPOB while insisting that election boycott is the only way forward said that some people have been brave enough to apologise publicly, even as it expect others to follow suit in the coming days.

The statement further said, “As 2019 approaches, the entire people of the East, West and Middle Belt are now being weakened on a daily basis and rendered powerless in the constituted political process in Nigeria.
“Buhari’s Government right before our eyes have ushered in a reign of anarchy that will consume many outside Biafra, unless Yoruba people and Middle Belt rally behind IPOB to put a comprehensive stop to 2019 general election.
“That is the only way power can return to the people. Osun and Ekiti States are signs of what is to come next year.”
© New Nigerian Newspapers 2018