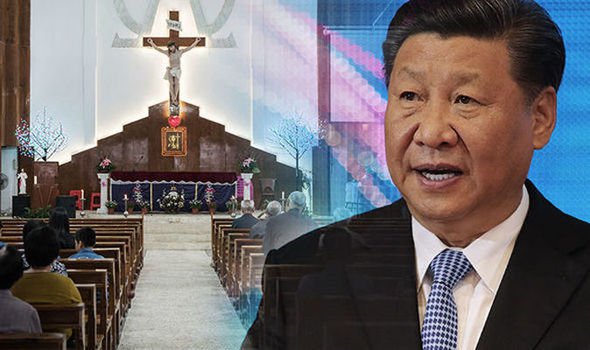 A BRUTAL crackdown against religion in China has seen crosses hauled down from Christian churches and replaced with portraits of the country’s President Xi Jinping and former Communist Party leader Mao Zedong.
By SIMON OSBORNE
 
Footage of crosses engulfed in fire have emerged as the Communist state continues to tighten its control over church operations across the country and there have also been reports of bibles being seized and burned.

Christian pastor Liang Zhang from Shangqiu city in Hennan province said officials came into his church and ordered the removal of a number of religious items.
He said: “For example, the banner saying: ‘For God, so love the world’ and the scriptures were torn down, and all things related to the Bible and faith had to be cleared out.”

Mr Liang said the crackdown is part of a Government drive to “Sinicise” religion by demanding loyalty to the officially atheist Communist Party and eliminating any challenge to its power over people’s lives.
But he said the campaign had intensified in recent weeks with even state-sanctioned Three-Self Patriotic Movement churches being targeted.
He said: “They have started to ask us to tear down things about Sunday School for kids.
“Many of the big official TSPM churches and the family churches were closed down.”

Mr Liang said the Government was installing “information officers”, who report behaviour that is anti-government or seen as a threat to social stability, in churches.
He said the only places where the Bible could be discussed freely were small church set-ups in houses, where 20-30 people could gather.
Under Chinese law, religious followers are only allowed to worship in congregations registered with authorities, but many millions belong to so-called underground or house churches that defy government restrictions.

Mr Liang said dozens of churches had been shut down in his county and those remaining were beginning to “look like culture clubs” rather than religious buildings.
He said: ”We now have our cross in the middle of our presidents’ portraits, which are President Xi and Chairman Mao’s portraits.”

CAN To Nigerians: "Pray without Stop For Nigeria, Leaders"