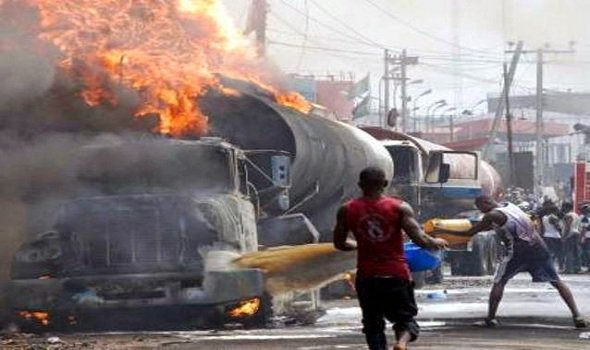 A fuel laden tanker exploded this morning beside the office of Department of State Security Services, DSS, and Ojo Barracks on Lagos Badagry Expressway.
At scene of the incident, ORIENTAL TIMES learned that the tanker fell as a result of the collapsed state of the road and spilled its contents on the road.
The impact of the fall resulted in the explosion of the tanker, in the process, other vehicles caught fire.

An eyewitness said the accident occured at 6: 45 am. No fewer than eight vehicles were consumed by the inferno, while an unspecified number of people, who were trapped in their cars were burnt.
Some people, who jumped out of their vehicles on sensing danger, sustained various degrees of injuries.
A woman, who jumped out of a moving commercial vehicle at the scene was seen crawling in the mud and was mistaken for a mad woman by a large crowd of sympathisers, who had gathered.

As of the time newsmen arrived at the scene, men of the Federal Fire Service and Lagos State Emergency Services Management Agency, LASEMA, had not come, while smoke was still billowing from the burning vehicles.
The accident increased traffic gridlock on the road as commuters coming to Mile 2 were seen taking Tedi Road as an alternative.
Fuel tanker explosion currently happening at Barracks busstop in Ojo, Lagos state. Four petrol tankers reportedly up in flames..Many cars have been razed in the raging inferno.

Facebook Comments
Loading...
Related ItemsNewsNigeria
← Previous Story Wife Material Shows Off The Foodstuffs She Bought With Just N970
Next Story → "It Has been a tough time In Nigeria all the way" – Buhari To the Masses