Home / News / Femi Fani-Kayode: "we're not safe, Pastor Kumuyi Shaking Hands with Killer Buhari is a big Shame to me and the entire Yoruba Race"

Femi Fani-Kayode: "we're not safe, Pastor Kumuyi Shaking Hands with Killer Buhari is a big Shame to me and the entire Yoruba Race" 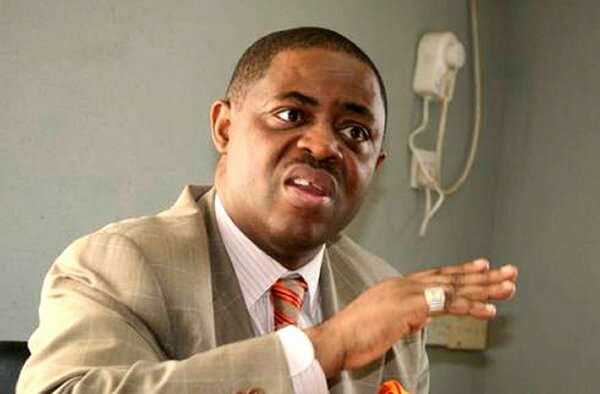 SPEAKING TRUTH TO POWER AND KEEPING THE FAITH
My paternal great grandfather (my grandfather’s father), Rev. Emmanuel Adelabi Kayode, was an Anglican priest. He was educated by the Christian missionaries and the Anglican Church and he studied theology at Fourah Bay College in Freetown, Sierra Leonne which was at that time a satellite campus of the United Kingdom’s Universty of Durham. In 1892 he graduated with honors with a Master of Arts degree in theology.
He was the first Anglican priest to introduce Christianity to the ancient town of Ile-Ife in the Osun province of the western region of the old Southern Protectorate of Nigeria and he was the first to build and Pastor a Church there.

He pastored the Church in Ile-Ife for many years before he was later transferred to Ondo province to head another branch of the Anglican Church for a further 16 years. After that he was posted to Ijebu province where he headed the local branch of the Anglican Church until he went into retirement in the old Lagos colony.
He was a deeply courageous man who loved the Lord passionately, who was totally dedicated and committed to the spreading of the gospel, who served the Church all his life and who was a great, powerful and fiery orator and preacher.
My second paternal great grandfather was

Rev. Joseph Suberu Fanimokun. He was my grandmother’s father. He was also educated by the Anglican Church and he also graduated with honors in 1892 from Fourah Bay College in Freetown, Sierra Leonne.
He was also later ordained as an Anglican priest. He was appointed Principal of the famous Christian Mission Society (CMS) Grammar School in the Lagos colony in 1896 and he remained principal until 1914. CMS Grammar School is the first and oldest secondry school in Nigeria.
These facts, coupled with the fact that I am a devout and practising Evangelical/Pentecostal Christian, are a  pointer to my rich Christian heritage and I am very proud of that.

It is precisely because of that heritage that I have profound respect for the Body of Christ and that I revere all genuine men and women of God.
I have the deepest affection for each of them even where and when I do not totally agree with all their views, actions and submissions.
Yet despite that once in a while that affection is put to the test and my patience and good faith is exhausted.
The picture below provides a good example of this. Frankly it is difficult for me to fathom or fully comprehend what is going on there.
I see the much-loved and highly respected Pastor William Folorunso Kumuyi of Deeper Life (one of the greatest Churches on the African continent and a pioneer Church within the Pentecostal denomination in Nigeria) and his wife felicitating with a man under whose watch more innocent and defenceless Nigerians, and particularly Christians, have been slaughtered than any other in the history of our country.

So much innocent blood has flowed under Buhari yet Pastor Kumuyi is still comfortable with smiling and shaking hands with him and neither has he said one word publicly about Leah Sharibu.
I and many others are saddened by this. This is all the more so because I happen to love Pastor Kumuyi and the Deeper Life Church. I always have and I always will.
Yet sadly I also feel a deep sense of shame and outrage about this outing. This is especially so when it has been reported by the media that he told the President that under his leadership “Nigeria is safe”.
Is this the same Nigeria that President Donald Trump of the United States of America was constrained to tell its leader pointedly and publicly that “the killing of Christians must stop?”
Is this the same Nigeria that Vice President Pence and senior members of the American House of Representatives described as “the most dangerous place in the world for Christians to live?”

Is this the same Nigeria where Boko Haram and Fulani herdsmen thrive and in which a courageous young Christian school girl from Dapchi was not released by her terrorist Boko Haram abductors simply because she has refused to renounce her faith?
Is this the same Nigeria where thousands of Christians have been butchered in their homes, hundreds of Christian clerics slaughtered whilst preaching and thousands of Christian communities and Churches burnt to the ground in the last 3 years and six months?
For how long must a few of  our clerics embarass the Body of Christ and Christendom by bowing before our oppressors and encouraging them to continously torment, afflict and terrorise our people.
Pastor Kumuyi’s photoshoot with Buhari reminds me of the famous picture of Pope Pius X11 shaking hands with and commending Adolf Hitler during the course of World War 11. The Catholic Church never lived it down and was compelled to tender a public apology for this grave error almost 50 years later.

Let us hope that one day every man and woman of God, whether he or she be a Pastor, Bishop, General Overseer or Archbishop, that has in any way supported, encouraged, applauded or colluded with the evil tyrant that has afflicted, scourged and plagued our land and our people over the last 3 years and six months will find the decency and courage to apologise for it.
Let us hope that more of our clerics can find the courage of the late Bishop Ajayi Crowther, the late Apostle Ayo Babalola, the late Archbishop Benson Idahosa, the late Rev. Musa Asake, the late Rev. Jolly Tanko Yusuf, Pastor Ayo Oritsejafor, Bishop Emmanuel Bolanle Gbonigi, Bishop Jasper Akinola, Prelate Sunday Mbang, Bishop David Oyedepo, Pastor David Ibiyomi, Dr. Paul Eneche, Prophet T.B. Joshua, CAN President Rev. Samson Ayokunle, Pastor Paul Adefarasin. Bishop El Buba, Bishop Matthew Hassan Kukah, Apostle Samson Suleiman, Apostle Chibuzor Chinyere, Pastor Rhoda Awiliki and so many others.
They and countless other leaders of the clergy from all over the country that have remained true to their calling, stood firm in the face of tyranny, refused to bow to evil, spoken truth to power and stood up against the manifest injustice that has gripped the land are our pride and joy.