Home / News / Nnamdi Kanu: "I was Born to Restore Biafra and not to remain as a Nigerian" (Flashback)

Nnamdi Kanu: "I was Born to Restore Biafra and not to remain as a Nigerian" (Flashback) 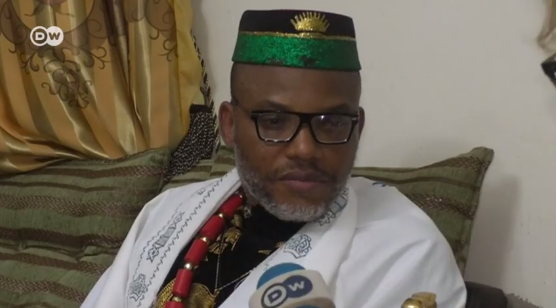 Nnamdi Kanu, leader of the Indigenous People of Biafra (IPOB) insisted that he was born to restore Biafra and could not afford to fail God together with his people who are yearning for emancipation.
Reports have it that Kanu noted in Umuahia, Abia state that there were no signs that injustices against people of the south east could ever be addressed through restructuring.
NAIJ.com gathered that the IPOB leader told his followers to disregard reports that he dropped his demand for the actualization of Biafra.
READ ALSO: Angry mob destroys church after pastor allegedly murdered a baby (photos)

He said the restoration of Biafra is not negotiable, saying that there is no amount of blackmail or intimidation will make him give up the struggle.
According to him, those who believe Nigeria could ever be restructured were deceiving themselves.
The IPOB leader said: ”The people benefiting from the current lopsidedness will stop at nothing in resisting any move towards restructuring because those who think Nigeria is their estate have made restructuring impossible”.
He insisted that the people advocating for restructuring would one day know that they have made a big mistake because there is nothing they can do any more.

Meanwhile, NAIJ.com had reported that the Ohanaeze Ndigbo reacted to the withdrawal of the quit notice to Igbo people in the northern part of Nigeria few weeks to its expiration.
Watch how Nigerians recently reacted to the establishment of Biafra Security Service:

Facebook Comments
Loading...
Related ItemsBiafraNews
← Previous Story Trump: "They want to kill me because I spoke the truth" – Poison Found in a Letter sent to President Trump
Next Story → UN: "Nnamdi Kanu has the qualification of a 'Head of State" – Former U.S Attorney General Bruce Fein Tells UN