Home / News / Trouble: "We'll Wake up one Morning and find out Nigeria is no more, Buhari has divided the Country in totality" – Chekwas Okorie Cries Out

Trouble: "We'll Wake up one Morning and find out Nigeria is no more, Buhari has divided the Country in totality" – Chekwas Okorie Cries Out 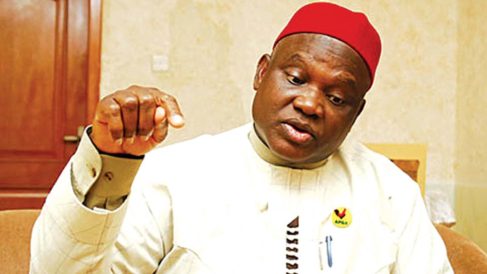 Chief Chekwas Okorie who is the National Chairman of the United Progressives Party (UPP), has claimed that the current administration led by President Muhammadu Buhari has succeeded in diving Nigeria, and that very soon Nigerians may be saying bye to corporate Nigeria
 
Okorie noted that Buhari failed to use the 57th independence anniversary as an opportunity to correct his false start.
According to the former presidential aspirant, “Buhari started very badly by alienating people, especially the people of the South-East, who he claimed didn’t vote for him.

“Again, this is the middle of his four-year tenure and I thought that his speech on a day like the independence anniversary should have been reconciliatory, reassuring and urging the citizens to come together for a brighter future.
“But he missed that opportunity. Nigeria is more divided now than any time in recent history. From independence to this day, Nigeria has not been this divided and it is as a result of the failure of the present leadership.
“But, I do believe that there would be political consequences for this failure and it will reflect in the 2019 general elections,” he told New Telegraph.
Speaking on the way forward, the elder statesman opined that restructuring is the solution to the ongoing problems in the nation.

He added, “The way forward is to bring about justice by restructuring Nigeria and every well meaning Nigerian has said it.
“Even my party, the United Progressive Party (UPP) has gone beyond restructuring to emphasise self-determination to the extent that it is in our constitution, which was ratified at a national convention.
“Any moment from now, Nigerians will stop talking about restructuring and move to the next level, which is self-determination. At that point, we may be saying bye to corporate Nigeria.”