Home / News / Trouble: until they Free Nnamdi Kanu and let "Biafra GO", Calamity upon calamities will continue to befall Nigeria – Activist Opens Up

Trouble: until they Free Nnamdi Kanu and let "Biafra GO", Calamity upon calamities will continue to befall Nigeria – Activist Opens Up 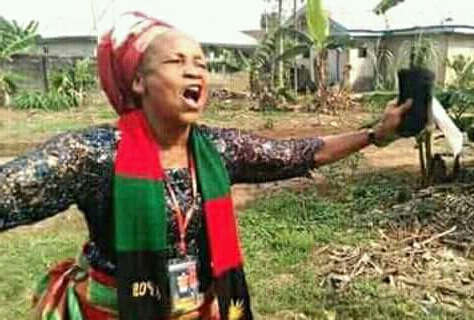 ABUJA – In what seems to be the continuation of signs of different plagues against the evil contraption called Nigeria another gaseous emission has been noticed in the Katampe area of Abuja the same location where the Nigerian air force lost their two jet fighters and a squadron leader last week Friday and just few meters away from Mpape where an earth tremor was witnessed earlier which also just few minutes’ drive to the nation’s seat of power Aso rock.
AND THE NIGERIAN GOVERNMENT IS TRYING TO PLAY EVERYTHING DOWN.

FOLLOWING gaseous emissions from Katampe community in Bwari Area Council, Abuja, Federal Capital Territory, FCT, the Federal Government, yesterday, said samples have been taken for analysis and called on the community to remain calm.
This was stated by the Minister of State for Mines and Steel Development, Abubakar Bwari, while on inspection at the site of the emissions along with the Minister of FCT, Muhammad Bello, and the Director General, Nigeria Geological Survey Agency, NGSA, Engr Alex Nwegbu, including directors.

Bwari assured the people living in the area that government will always be here to address such environmental issues, therefore should be given time to investigate and get back to them.
He said: “Well, as you can see, we are all here we our team led by the Director-General of the Nigerian Geological Survey Agency, and they have taken samples to go and analysed the samples and after that, we can be able to tell you what it is and just like our Minister said, we are happy that our community leaders are vigilant to some of the things that are happening in their locality.
“I must tell you that government is concerned about what is happening around us and we urge the community not to panic. We are on top of this matter and to assure you that any slightest occurrence to our environment, we will always be here to address it. So just give us some time to investigate and get back to you.”

The Minister further stated that the presidential committee set up to investigate the recent tremor that occurred in Mpape and environs are doing their job to ensure the root cause was unravelled and made public when they submit their report.
“It will interest you to know that, we were in the meeting of the earthquake committee the one that was instituted on the recent incidents of earth shaking experienced by the inhabitants of Mpape and surrounding environments and we were in a meeting when we heard about this”, he said.
In his remarks, the DG, NGSA, Engr Alex Nwegbu officers were already carrying out their investigation on the emissions and radiation levels with instruments used for the analysis.

“My officers are already inside the area trying to see if it extends beyond this place and they have equipment where they are testing the radiation and things like that to ensure that we are not exposed to any toxic materials.
“So, we are going to use maybe, hand-worker and burn down to know the extent to which this material is buried down and from there, we draw our conclusions”, he stated.
WE HAVE NEVER SEEN ANYTHING LIKE THIS BEFORE NOW

According to an indigene of the community, simply called Frank, the substance oozing out from the ground looked whitish and such have never witnessed in the community.
“When we first noticed the flowing whitish substance, what came into our mind was, nothing but, surprise because, we have never witnessed anything like this before as far as this community is in existence, he said.
COULD ALL THESE BE PART OF THE FULFILMENT OF MAZI NNAMDI KANU’S PROPHECIES, THAT NIGERIA WILL BE DESTROYED BEYOND RECOGNITION IF THEY FAIL TO LET BIAFRA GO?
YOUR GUESS IS AS GOOD AS MINE
Written by:
Mazi Chukwudi Peace
For: Abuja State Media

Facebook Comments
Loading...
Related ItemsBiafraNewsOpinion
← Previous Story Again: ‘Palestinian Authority’ says that UN should forcefully remove the American embassy from Jerusalem – A big slap to Trump
Next Story → Unpaid Salaries: "My hearts are with you all, Have mercy on my government" – Buhari tells Teachers