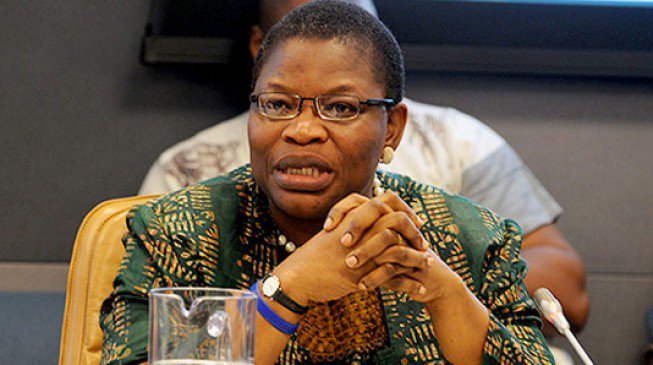 Oby Ezekwesili, presidential candidate of the Allied Congress Party of Nigeria (ACPN), says former Vice-President Atiku Abubakar cannot orchestrate the change Nigeria needs to progress.
Speaking during Sunrise Daily, a programme on Channels Television, Ezekwesili said Abubakar,  who won the presidential ticket of the Peoples Democratic Party (PDP) is not any better than the President Muhammadu Buhari.
According to her, Nigeria needs new politics, not Abubakar nor Buhari, who she says belong to old politics.
“No, he can’t bring the change we are referring to. That is the old politics. Nigeria is ripe for new politics,” Ezekwesili said.

“I am talking of a new nation where sacrificial leadership is what we put at the centre of where people lead and that citizens first, not politicians first, becomes the mantra of everyone in a position of leadership.”
Ezekwesili said neither the PDP nor All Progressives Congress (APC) should be voted into power in 2019.
The former vice-president of the World Bank described the APC and PDP as “siamese twins of failure”, saying the future of Nigeria and Nigerians would be at stake if either of the parties is given the mantle of leadership.
“Nigeria is at stake should you go with any of these two parties. These parties are the Siamese twins of failure. We have no reason to vote to continue to fail,” she said.
“Even the divine is tired of seeing Nigeria fail. What is at stake, children who die when they should not be dying under the watch of a leader that came under the grand swell of being a tried and tested general that could work everything to give security to people.

“What is at stake is that the normalising of killings across the country will simply just become our way. What is at stake is that corruption becomes known permanently as what we are known for as a country.”
Ezekwesili, however, said her party comes with a message of hope for Nigerians, adding that the country will be renewed if she is voted in as president.
“Our composition is going to be find all Nigerians that have character, competence and capacity, those who totally believe that we have no business being in the lower rungs of performance,” she said.
“Number one thing is that we are going to engage Nigerians to agree that our economic philosophy is that the citizens, enabled, will flourish as private sector to signal the path for productivity and competitiveness of our country and themselves.

“On that, we build a completely different approach where education for human capital is the new oil. We are simply going to see oil as a bonus. I have alresdy seen a new Nigeria, in fact, I have entered a new Nigeria.
“This election is going to be brutal, it is going to be tough and dangerous but we are going to give it everything we have because we are fighting for the soul of Nigeria.”
Asked if she was willing to partake in a debate with the other candidates, Ezekwesili said: “The summary of all these grammar that you have just spoken is that Buhari must debate. No proxies.
“We are going to line up and tell the people of Nigeria what we want to do. Nobody is going to escape debate in this election. If they run from debate, run from them.”