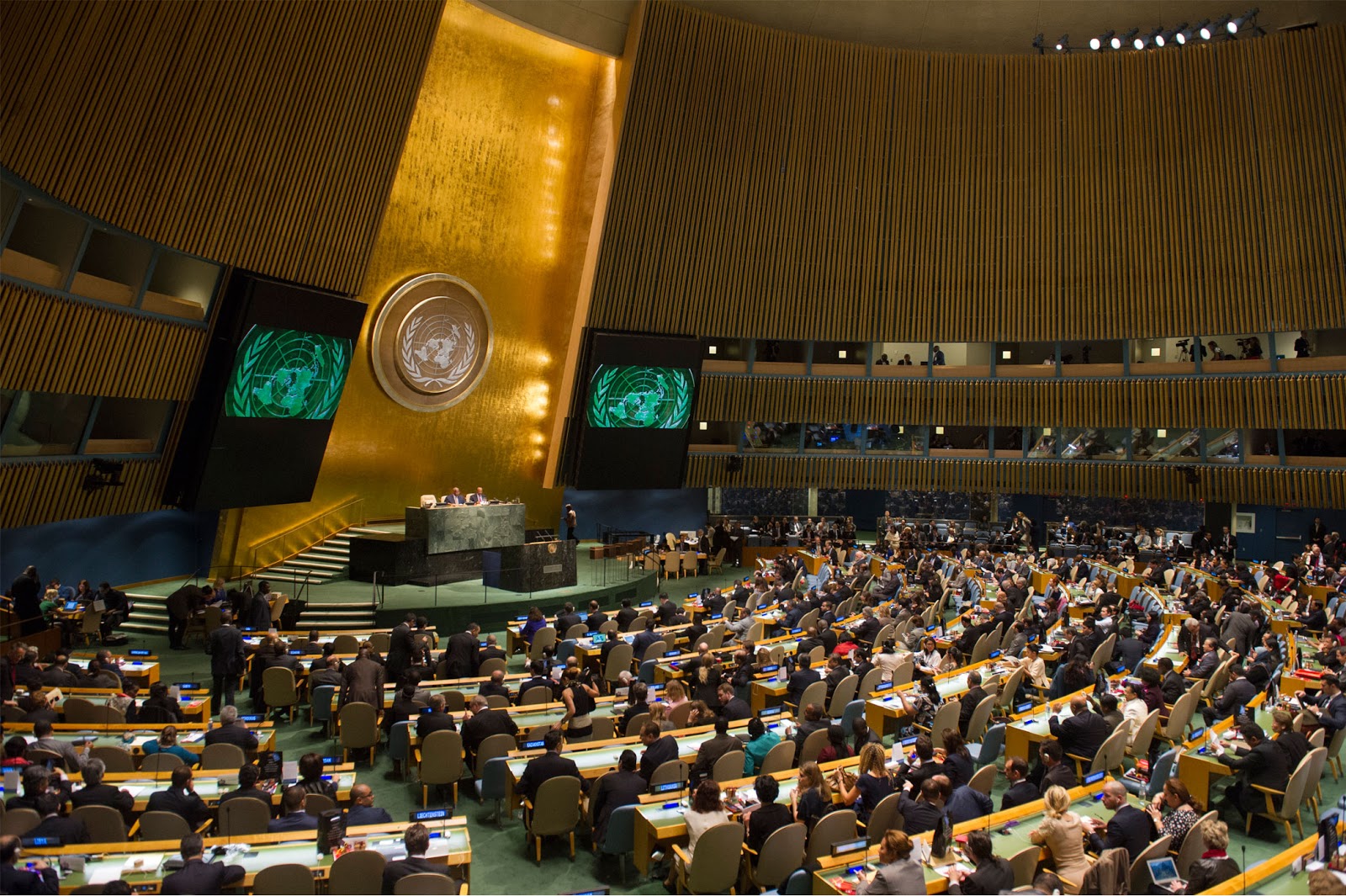 Living A Fulfilled Life Outside Nigeria Orchestrated By UN Referendum For Biafra
It is becoming more obvious that things are no longer at ease in Nigeria and Biafra independence is overdue. The Indigenous People of Biafra (IPOB) has been conducting its campaign for the independence of Biafra in a non-violent manner. However, despite the group’s non-violent posture, the Nigerian government and its security agencies have mindlessly killed, maimed, arrested, detained and prosecuted several Pro-Biafra agitators over the years. Until Biafran people are granted freedom, things will continue to go wrong in Nigeria.
The United Nations Universal Declaration of Human Rights Article 15 states that “everyone has the right to a nationality and that no one should be arbitrarily deprived of a nationality or denied the right to change nationality”. The United Nations Charter on Self-determination is a universal right and the people of Biafra have the right to leave the colonial union called Nigeria.

In view of the above information, it can be gathered that Referendum is a peaceful approach adopted by the Indigenous People of Biafra (IPOB) to actualize Biafra and this is the only legal approach for the recognition of a secessionist state by the International community. The Indigenous People of Biafra’s (IPOB) quest for self-determination is lawful
and finds justification in Article 1(2) of the United Nation’s Charter of Human and People’s Rights to which Nigeria is a signatory which recognizes the right for self-determination. Under United Nation Charter, “all forms of amalgamation and forceful takeover of indigenous land were to expire after a hundred years”. Therefore, the amalgamation of Nigeria was void by the 1st of January 2014.
The question that remains to be answered is why are Biafran people agitating for self-determination? The entire people of Biafra have been economically, politically and socially marginalized in Nigeria. They took our positions in the military, police, air-Force, civil- Defense, Navy, etc. The Nigerian government systematically introduces policies that make Biafra businesses to crumble. They grasped our resources and made a law that makes it impossible for Biafrans to build their roads.  They kill our youths in a little provocation, millions of our people have died and thousands are still dying.
They chased out our mothers and fathers in their own farm by raping and killing them in the name of Fulani-killer herdsmen. They gave us quit notice, they killed our boys in all oil producing regions. They annihilated the whole Odi Community and nobody raised an eyebrow. They introduce all kinds of military killing parades, in our land like “Operation Python dance”, “Operation Crocodile Smile”, and many of them to keep us in fear day and night. Our military men are retired without accomplishing their dreams. They beheaded our sister for preaching the gospel and paraded her head on TV, and their court discharged and acquitted the killers. How many do l list and how many will l forget? If l continue to list the atrocities committed by Nigerian governments against the Biafrans, day will break.
The current Nigeria leadership under President Muhammadu Buhari has failed to protect and defend the Fundamental Human Rights of Biafrans. Biafrans are under siege in their homeland, Biafra, by Nigerian security forces and Islamic jihadist as a result of which Biafran peoples’ lives, properties and means of livelihood are in mortal peril. Biafrans are targets of ethnic cleansing in the present day Nigeria simply because they are Biafrans. Many Biafrans have claimed in the past to be Nigerians believing and hoping that such claim would guarantee them safety from harassment and from being targets of premeditated mass murders but this claim has not brought any respite to their predicament.

As a result of Nigerian State sponsored acts of violence and terrorism against the Indigenous People of Biafra, acts which consistently target and murder Biafrans with impunity with none held accountable, millions of young Biafrans have escaped to other countries all over the world looking for safety away from their fatherland.

The underground secret detention facilities of the Nigerian secret police (SSS) are filled with Biafra citizens held incommunicado under degrading and inhuman conditions without being prosecuted for committing any crime whatsoever. About 112 IPOB Women were arrested, tortured and charged for treasonable felony on the 17th of August, 2018 by the Nigerian Police Force. Their crime was that the women took to the streets of Owerri, the Imo state capital, to protest the disappearance of Nnamdi Kanu, leader of Indigenous People of Biafra (IPOB).
Last June, 2017, Buhari tacitly endorsed a Hausa-Fulani threat to expel by force and violence and to plunder 11 million Igbos in twelve northern Nigerian states that have adopted Sharia as their legal codes if they did not abandon their Igbo homes and businesses by October 1, 2017.  During the past few years in northern Nigeria, Hausa-Fulani terrorists have destroyed thousands of churches and religious schools and displaced millions of Christian Biafrans.
On the 14th of September, 2017, a courageous and influential Biafran leader, Nnamdi Kanu, had his home attacked and quarantined by the Nigerian army and his followers killed.  Grisly videos and photos taken at scenes of the harrowing crimes are conclusive.  What they prove amounts to state terrorism—the systematic employment of violence to intimidate or coerce a civilian population. Unfortunately, no actions taken to bring to book all the military personnel involved in the bombardment of the home of the leader of the Indigenous People of Biafra.
There is an adage in my place which says, “it is only a person that wears a shoe knows where it pinches him or her”. The Biafran people have been perpetually deprived of freedom by the Nigerian government and it is only they that know and experience the pains of freedom deprivation. In this case, Biafrans cannot wait for Nigeria’s parliament to initiate a referendum on their behalf. Again, having understood the composition of the Nigerian parliament, majority of which emanate from the Northern part of Nigeria, there is no way the parliament can speak in favour of Biafra referendum. And this is the reason why this statement was credited to IPOB leadership, “We Biafrans in pursuit of our inalienable, irreducible and God-given right to restore our stolen sovereignty do hereby state that we do not require the permission of the Nigerian State or her government officials to grant us our natural freedom”.
I am indebted to world leaders who have shown their sympathies for the oppressive and subjective economic policies of Buhari-led Nigerian government against the industrious and creative people of Biafra. In view of the above mentioned atrocities committed by the government of the Federal Republic of Nigeria, there is, therefore, an urgent need for UN to organise a referendum for the people of Biafra.

It is worth mentioning that the presence of both National and International UN monitoring observers are required during Biafra referendum. They would be required to carry out the following tasks:
a. Both national and international observers/ should be given the widest possible opportunity to participate in a referendum observation exercise.
b. Observation must not be confined to Election Day itself but must include the referendum campaign and, where appropriate, the voter registration period and the signature collection period. It must make it possible to determine whether irregularities occurred before, during or after the vote. It must always be possible during vote counting.
c. Observers should be able to go everywhere where operations connected with the referendum are taking place (for example, vote counting and verification). The places where observers are not entitled to be present should be clearly specified by law, with the reasons for their being banned.
d. Observation should cover respect by the authorities of their duty of neutrality.
It is now obvious that the people of Biafra are not wanted in the Nigerian Federation but the presence of Oil located in the Biafra land is what is temporarily binding the two different countries together. It is, therefore, IPOB’s determination to restore Biafra Republic where its people will have greater freedom and accommodation.
The Biafrans are always the victims of every religion riots in Nigeria. In 2015, a total of 150 Indigenous People of Biafra were slaughtered by Boko Haram infiltrated Nigeria Army (Amnesty International). From 2010 to 2017, more than 3000 Biafrans were massacred, raped and buried alive by the Federal government of Nigeria sponsored Fulani Terrorist Herdsmen. The question that remains to be answered is: for how long shall my people continue to suffer untimely death from the government of the Federal Republic of Nigeria? There is, therefore, an urgent need for the UN to organise a referendum that would see every Biafran become liberated from the perpetual bondage of the Nigerian government.
Comr. FELIX C ONYEMACHI
For IPOB Writers Press
Edited & Published by IPOB WRITERS PRESS
Contact: ipobwriters@ipob.org
Follow us on Twitter: @ipob_writers

What we’ll do if US, EU, UK continue to cause problems in Nigeria after observing elections – APC chieftain, Salvador

We're been killed everyday for no Reason, Our leaders are not talking and no one is coming to our rescue – Plateau Youths Shutdown the city of Jos, Blasts Jang , Others