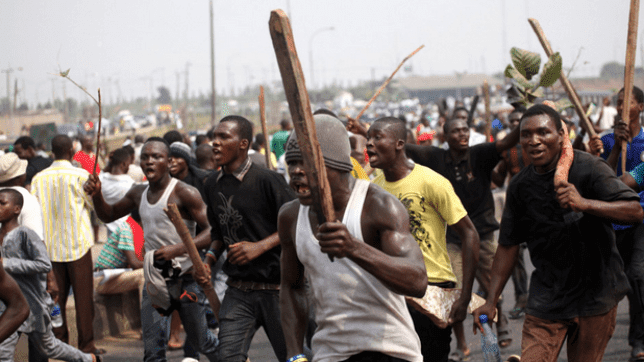 Commercial activities in Jos, the Plateau State capital were on Monday temporarily brought to a halt as residents of the state stormed the streets to protest the endless killings in the state.
The protesters are calling for the prosecution of those behind the ongoing killings in the state.
The protesters, under the aegis of ‘The Faithful, also want owners of the deadly mining pond in Dura Du, where the car belonging to the missing General Idris Alkali (rtd) was foundarrested and prosecuted.
They were, however, intercepted by a team of Mobile Policemen on their way to the palace of Gbong Gwom of Jos for security reasons.
They were seen displaying placards bearing various inscriptions such as, “Who owns the Plateau strange Pond? “Jang must repent from his evil or die,” we shall see blood no more.”
 
The protest came barely 24 hours after the Jama’atu Nasril Islam (JNI) blasted for his cold attitude over the killings under his nose.
Convener of the protest, Bro. Rotdunna Sekat, while speaking on behalf of the group, called for the prosecution of the former state governor of the state, Jonah Jang, as one of the brains behind the bloodletting in the town.

Sekat said, “We do not want to be a party to the shedding of innocent blood that is today crying ceaselessly to God from Plateau so we took time to search ourselves and search on behalf of the good people of the state for we know that we the people of Plateau state are not collectively evil.
“We were guided to Proverbs 29:2 that says “When the righteous are in authority, the people rejoice: but when the wicked beareth rule, the people mourn.” The people we identified in this authority are the Gbom Gwom Jos, Dr Jacob Gyan Buba and a former state governor, Senator Jonah Jang.
“These are the leaders that must be called to account for the carnage that have become daily occurrence in our land. For even the Bible in Isaiah 1:23acknowledges their roles when it noted that “Your rulers are rebels and companions of thieves; Everyone loves a bribe And chases after rewards They do not defend the orphan, Nor does the widow’s plea come before them.”
“We see the hands of these two in the pond that was discovered in Dura-Du, Jos and they cannot absolved themselves as being complicit in inciting the community of Berom to snuff the life out of other Plateau people and Nigerians. It is possible that they act in the inhumane way they do because they are being misled by people they see as their divine leaders, which is why we hold out hope for them like the Bible does: Ezekiel 33:11 ESV “Say to them, As I live, declares the Lord God, I have no pleasure in the death of the wicked, but that the wicked turn from his way and live; turn back, turn back from your evil ways, for why will you die, O house of Israel?”
“We have watched in pains as the activities of these two men have led to endless bloodshed that can make us all stand guilty before God. We would therefore rely on God’s word to decide what to do with them. Leviticus 18:29 “For whoever does any of these abominations, those persons who do so shall be cut off from among their people,” is clear what has to happen for we are further exhorted by Psalm 125:3
“For the scepter of wickedness shall not rest upon the land of the righteous, So that the righteous will not put forth their hands to do wrong.”
“We, however, hope that Nigerian laws catch up with him here on earth pending when he answers to God.

“We only urge that people recognize when the wrath of God begin to befall Jang and all those that have walked in his path like Shimei will come to a sad end. This is why we urge the people of Dura-Du and all other well-meaning Beroms to separate themselves from iniquity that their leaders have become.
“Those that had colluded with these evil should explore the grace of repentance and the peace that comes from confession to leave behind the evil they have done. Where possible they should volunteer information that will assist law enforcement agents get to the bottom of the evil that has been done against our dear state.
“The good people of Plateau state should come together to demand that enough is enough with the soaking of our soil with blood so that we do not yield sorrow on a longer term.
“We do not want to have to be the ones to answer for the sins of evil men before God so we are acting now to cast them out from our midst before their sins are visited on the entire land. The state and federal governments must align with the people in this regard so that God does not hold the government as being in collusion with the sponsors of killers.”

UN: "Only Referendum Will determined the faith of Biafrans in Nigeria, nothing else" – Activists