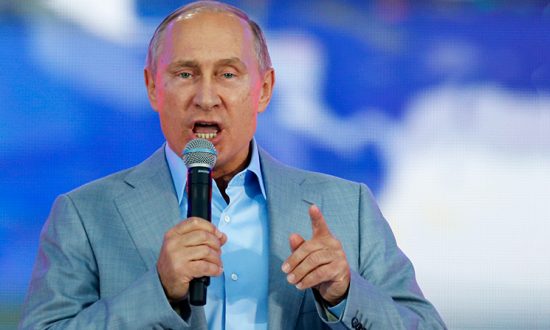 Russia’s deputy foreign minister Oleg Syromolotov said Britain is “Russia’s enemy”, insisting Moscow will respond with a fierce attack if Britain’s military strikes.
He told Russian’s national news agency RIA Novosti: “Great Britain has been Russia’s enemy since Ivan the Terrible.
“If they are making such declarations, then they will probably try it out, but we’ll defend ourselves and the response will be quite severe.”
Ivan the Terrible ruled Russia in the 16th century, exercising autocratic control over Russia’s nobility while brutally killing thousands of his own people.

Mr Syromolotov’s dire warning comes after British troops engaged in simulated cyber exercises against the Kremlin last weekend.
UK’s defence chiefs war-gamed a cyber counter-attack to black out Moscow, in preparation for a Russian attack against the West, senior security sources told the Sunday Times.
More than 5,000 British troops took part in large-scale cyber warfare exercises in Oman, in a bid to step up UK’s cyber defence capabilities and counteract Kremlin’s escalating aggression.
Dozens of tanks, ships and Typhoon warplanes mocked a simulated battle exercise, with plans to shut down Moscow and prepare for a possible confrontation with Russian military.

 
A senior security source told the Sunday Times: “Russia will continue to try to undermine our western democracy. They won’t probably go to conventional war, but there are islands off Estonia they could take to test Nato’s commitment to article five.
“If they sank our aircraft carrier with a nuclear-tipped torpedo, what is our response? There’s nothing between sinking their submarine and dropping a
nuclear weapon on northern Kachatka.
“This is why cyber is so important. You can go on the offensive and turn off the lights in Moscow to tell them that they are not doing the right things.”
Responding to Britain’s increasing defence preparedness, the Russian embassy in London said in a statement: “As far as we can judge, the British side thus dissociates itself from the irresponsible media publications and their anonymous sources which try to scare the public by scenarios of Russia ‘seizing islands off Estonia’, and threaten to ‘turn off the lights in Moscow’.

“Although the presence of aggressive plans has not been denied directly, we assume that the United Kingdom, being a responsible member of the international community and a permanent member of the UN Security Council, will fulfil its promises to act in accordance with international law, including its fundamental prohibition against use or threat of force.”
UK’s defence preparations come amid growing concerns over Russia’s threat, after allegations Moscow tried to hack the UK government and the international body that headed the Salisbury Novichok probe.

Over the years, Russia has carried out a series of cyber strikes against the West.
In 2007, the Kremlin knocked out the computer systems of the Estonian parliament, banks and broadcasters in and in 2017, Moscow carried out malware attacks on the Kiev underground system and Odessa airport in 2017.
UK’s chief of the defence staff, General Sir Nick Cartern told Sky News: “Russian espionage, Soviet espionage, has never stopped.
“It’s deeply embedded in Russia’s DNA to use the capabilities that it has to disrupt our nations, to pursue their own national interest, to, as it were, reinforce Putin in power.
Express.co.uk

I forgive you because I know you're the next President, I see you are better than the culprit Buhari in Aso rock – Obasanjo Tells Atiku