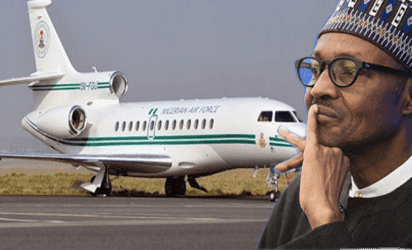 It is already seven days into President Muhammadu Buhari’s 10-day private visit to the United Kingdom, UK, with no public appearance of the President in Britain, save for his arrival into the country, in the late hours of April 25.
For nearly 170 hours in a foreign land, the President has not been seen nor heard from.
Abuja House, the President’s choice destination in London, has been devoid of its usual buzz whenever Buhari is around, signifying that the President has opted for another location, for his private visit.
Also significantly absent during this visit, is the customary pilgrimage of Very Important Personalities, VIPs, and high-ranking government Officials to London, to see Buhari for photo-ops. Same is the reception hosted for the President’s long-time friends, like the Archbishop of Canterbury, Justin Welby.
Likewise, UK’s Media is unconcerned about the presence of a Foreign Head of Government in their country.
Checks in Britain’s top dailies turned up nothing about the President’s visit. The only reports that featured Nigeria in The Daily Telegraph, The Sun, Daily Mail, Daily Star, Daily Express, and The Times, were on the recent murder of the British Aid worker, Faye Mooney, in Kajuru, Kaduna, and visit of celebrated supermodel, Naomi Campbell to Lagos, for the Arise Fashion Week.
The 76-year-old President has previously been in London, for long spells of medical care. From May 2016 until mid-2017, Buhari was in London for medical treatment for increasingly long periods of time, forcing government denials that he was gravely ill or even dead.
By the time of his expected return on May 5, he would have barely three weeks left to the end of his first term in Office, which has seen him spend a total of 409 days – a year and 44 days – (and still counting), travelling to 33 countries in the four years of his first term in Office. He has spent so far 224 days in the United Kingdom, the country he visited the most, mostly on health grounds, and meetings of Commonwealth Heads of State and Government.
Buhari who was first elected in 2015, is scheduled to be sworn-in for a second four-year term, on May 29, though the Peoples Democratic Party, PDP, Presidential Candidate and main challenger, Atiku Abubakar, has lodged a legal petition to the election results.
Insiders in Aso Rock, said that the politics of the next cabinet might have forced the President’s private visit, rather than insinuations of a health challenge.
They claim that the President wants to avoid the repeat of the 2015 mistake, when he deliberately waited for 6 months, to form his Change Cabinet.
A source confided that it was such scheming that made the Lagos State Governor, Akinwunmi Ambode, rush to commission uncompleted projects with the President in attendance, much against the advice of the Lagos State Leader, Asiwaju Bola Tinubu.
“Ambode is racing against time to impress the President as the new ‘Mr. Infrastructure’ for the Next Level. That was why all the South-West Leaders were in attendance, except Tinubu and Fashola.”
According to another source within the Presidency, the President has resolved to source seasoned Technocrats as members of his new cabinet, to help him actualise his agenda for the ‘Next Level’, saying that, part of the reasons he travelled, was to avoid distraction by political jobbers, who have been mounting pressure on him.
However, back home, the polity is being heated by statements credited to the Presidency, that Buhari has not contravened any section of the Constitution, by not transmitting power to the Vice President, before embarking on the trip.
Source: post-nigeria
Facebook Comments
Loading...
Related Topics:NewsNigeria
Up Next

IPOB declares ‘SitAtHome’ On May 30, Callls on Southeast, S/South and Middle-belt to respect order