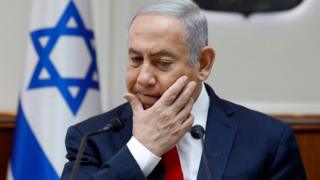 Amid escalating fighting between Hamas and Israel, and after over 450 rockets were fired since Saturday morning at southern Israeli communities, Prime Minister Benjamin Netanyahu said Sunday he had ordered continued “massive strikes” against the Gaza-based terror group.
“I ordered the IDF this morning to continue its massive strikes against terror forces in the Gaza Strip, and instructed [the army] to bolster its presence around the Gaza Strip with armor, artillery and infantry forces,” Netanyahu told the cabinet on Sunday ahead of its weekly meeting in Jerusalem.

“Hamas bears responsibility not only for its own attacks and actions, but also for Islamic Jihad’s actions, and it is paying very dearly for them,” he declared.
Netanyahu’s comments come after the Israel Defense Forces said it had sent a tank brigade to the Gaza border on Sunday to join forces already there, and said it was preparing for fighting in the coming days.
In response to the attacks, which claimed the life of one Ashkelon man, Moshe Agadi, and wounded dozens, the IDF said it has bombed over 220 military targets in the Strip, causing considerable damage to Gazan terror groups’ facilities, but relatively few casualties in the densely populated coastal enclave.
Later Sunday, after Netanyahu’s remarks, Gaza terrorists fired a massive barrage at southern communities. Several people were wounded, two of them critically, when projectiles scored direct hits on an Ashkelon factory and on a car.

Ahead of the cabinet meeting, Public Security Minister Gilad Erdan, a member of the security cabinet, called for dramatically upping Israel’s retaliatory strikes, and said concerns over the fate of the upcoming Eurovision song contest in Tel Aviv shouldn’t drive Israeli policy.
“No despicable terror group can defeat us, and the IDF must continue to strike Hamas, Islamic Jihad and the rest of the terror groups with force,” he said at an Independence Day ceremony of the Israel Police.
“In my view, national or cultural events shouldn’t be a consideration in deciding the scope and severity of the blow that must be dealt to the enemy — not the Independence Day celebrations, and certainly not Eurovision,” he said.
He called to “continue to escalate the strikes on Gaza until a long-term quiet is obtained, and we must renew the targeting of the heads of the Hamas military wing, as well as other terror groups in the Strip.”
The sentiment was echoed by other political leaders.

Science Minister Ofir Akunis said preventing the cancellation of the Eurovision contest “is our lowest priority” while Israelis faced rocket fire.
President Reuven Rivlin said Sunday that Israel would not be cowed by the fire.
“We will continue to stand against this dreadful terror, and will respond forcefully and without wavering, to any attack on the security of our people,” he said as he met with officers from the IDF’s casualties unit in Jerusalem.
He called on Israelis, “to please listen carefully to the instructions of the IDF Home Front Command, which saves lives time after time, and take good care of yourselves.”
On a visit to the Eshkol Regional Council on Sunday, he also called on the government to do more to support the communities along the Gaza border that were worst hit by the rocket fire.
“Right now is a time for fighting. But it is the responsibility of the prime minister, the cabinet and the government to ensure that after this fighting is over, the communities surrounding [Gaza] will be supported socially, economically and with their infrastructure,” he said.

Gantz said Israel should also pursue a diplomatic process with Gaza, “which unfortunately hasn’t happened in recent years. I hope they do that now.”
The fighting began shortly after 9:30 a.m. Saturday, continuing into Sunday morning with a few hours-long periods of calm overnight.
The exchanges of Palestinian rocket fire and Israeli airstrikes appeared to slow on Sunday morning, but both sides said they would step up their retaliations if the other side’s attacks persisted.
An IDF spokesperson said the military sent its 7th Armored Brigade southward “so that there would be a force available in the Gaza Division in case there is a need for it.”
IDF tanks stationed near the Israeli-Gaza border on March 27, 2019. (Dudi Modan/Flash90)
Another military spokesperson, Lt. Col. Jonathan Conricus, said the IDF anticipated the fighting to continue for several more days.

The intense violence that engulfed the region over the weekend began on Friday evening, when a sniper in Gaza shot at two soldiers along the border, injuring them, and the military responded with a strike on a Hamas position that killed several members of the Islamist terror group.
The exchange of fire followed several weeks of relative calm between Israel and Gaza amid an unofficial armistice, which appeared to be breaking down as terrorists in the Strip stepped up their violent activities along the border in the days precedin the outbreak of fighting. Gaza terror groups said their actions were retaliation for Israel not abiding by the ceasefire agreement by halting the transfer of Qatari money into Gaza — a charge Jerusalem denied, blaming the delay on Qatar and the United Nations.

The military said the vast majority of the projectiles fired from Gaza were launched by Hamas, which rules Gaza, and the Palestinian Islamic Jihad, the second most powerful terror group in the Strip. A small number were fired by other groups in Gaza.
The military said on Sunday that it had conducted some 220 retaliatory raids against targets connected to Hamas and the Iran-backed Islamic Jihad since Saturday and was continuing to do so on Sunday morning.

At least four Palestinian men in their 20s were reported killed in the Israeli strikes, all of whom were said to have been part of rocket-launching teams.
Gazan authorities also blamed the deaths of a mother and her baby on Israel, but the IDF denied responsibility and said the two died as the result of a failed rocket launch.
“Based on our intelligence, we can confirm that they were killed by an accidental use of Hamas weaponry,” IDF spokesman Lt. Col. Jonathan Conricus said Sunday, referring to their deaths as “unfortunate.”
The Israel Defense Forces said its strikes targeted an Islamic Jihad cross-border attack tunnel, the entry points to several other tunnels, a Hamas underground rocket production facility, weapons caches, military bases, observation posts, a cement factory used to produce the linings of tunnels and underground bunkers, and several multi-story buildings used by terror groups in the Strip.